Celebrate the 20th anniversary of Harry Potter and the Philosopher's Stone

20 years ago today Harry Potter and the Philosopher's (Sorcerer's) Stone was published for the first time in Britain. Nobody knew it was going to be special and initially only 500 copies were printed.

20 years ago today we headed to Platform 9¾ for the first time and began our 1st term at Hogwarts School of Witchcraft and Wizardry. 20 years ago today we first met Harry Potter, Ron Weasley, and Hermione Granger.
20 years ago today was, unbeknownst to all, a generation defining moment in which J.K. Rowling rekindled the fire her predecessor Tolkien began, sparking the Golden Age of Fantasy. 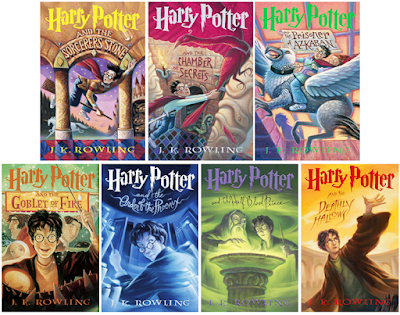 Just started The Diamond Throne, book #1 of The Elenium by David Eddings. 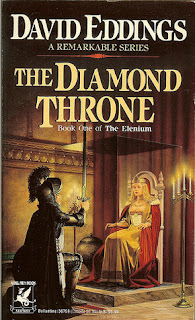 An old favorite that had me literally howling with laughter the first time I read it, I look forward to seeing old friends again and reliving an epic adventure in which Church Knights work the magic of other gods and the real tyranny comes from human vices.

See you in the palace tomorrow, Sir Sparhawk of the Pandion Knights.
Posted by Ian E.S. Adler at 7:01:00 PM No comments:

The Tower at Stony Wood 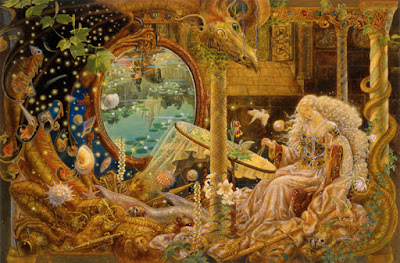 My father and I just finished The Tower at Stony Wood by Patricia A. McKillip.

Inspired by Tennyson's The Lady of Shalott, this book takes the tale to truly mythopoetic heights. A mystery woven in fine thread between several towers, we walked with valiant yet impoverished islanders desperate for freedom from their overlord, a knight journeying through a land of subtle magic and beauty, and a seal-like baker and her children seeing and weaving stories from a mirror in the tower at Stony Wood. And we met some fey sisters who know that an outwardly simple mission can weave the tangled threads of fate and chance together to restore magic and peace.

Just finished The Taste of Lightning

Just finished The Taste of Lightning by Kate Constable, sequel-companion novel of her Chanters of Tremaris trilogy. Seldom are drug lords and wars used in Fantasy, if ever, but Constable deals with it just as we deals will all else: frank and heart-filled honesty. And a climax fit to sing one's boots on fire.

Much work lies ahead, so good job thus far and good luck to you Tansy, Perrin, Skir, Evie, and Beeman (seriously). Please say hello to Calwyn for me, when/if you see her.
Posted by Ian E.S. Adler at 1:53:00 PM No comments:

It ironically appears that GRRM heavily based his Doom of Valyria and related events upon Tolkien's Downfall of Númenor.

The Númenóreans were the strongest and proudest race of humans who ruled a vast overseas empire from their island home, they themselves having distinct physical features that set them apart from other humans (great height). Then, to cut a long story short, they fell from their wisdom and embarked on a deed that promised destruction. But before they fell, Amandil son of Númendil, Lord of Andúnië led his people away and so escaped the utter and complete rupturing and flooding that followed which coupled with the total annihilation of Númenor. His son Elendil would go on to found the Kingdoms of Gondor and Arnor in Middle-Earth.

In GRRM's A Song of Ice and Fire universe, Valyria was the
strongest and proudest of civilizations, ruling a vast overseas empire from their peninsula  home, they themselves having distinct physical features that set them apart from other humans (purple eyes and silver-gold hair). Exactly how and why they fell remains a mystery, but before the Doom occurred, the daughter of Lord Aenar Targaryen had visions of a cataclysm that would overcome Valyria. A foresight which came true as the Valyrian Peninsula was flooded and shattered beyond repair. Thus he fled to Westeros, where his descendant Aegon the Conqueror would unite the land under the Iron Throne.

Thus in both cases did a noble House flee the vast empire before it's destruction and would go on to be Kings and lords of humans. Of course, Númenor as well as Gondor and Arnor are vastly more noble and humane realms than Old Valyria and Westeros, but the fact still remains.
Posted by Ian E.S. Adler at 1:31:00 PM No comments:

As he does with everything, Tolkien takes Romantic Fantasy to a whole other level. Indeed, the romance between Beren of the House of Bëor and Lúthien Tinúviel makes the tale of Aragorn and Arwen look tame. 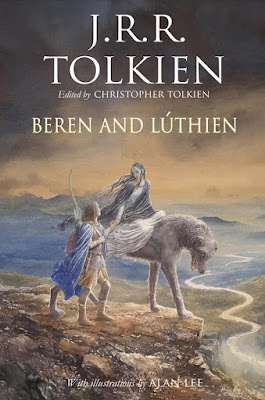 "Among the tales of sorrow and of ruin that came down to us from the darkness of those days there are yet some in which amid weeping there is joy and under the shadow of death light that endures. And of these histories most fair still in the ears of the Elves is the tale of Beren and Lúthien." - J.R.R. Tolkien


(Tolkien often referred to his wife, Edith, as "my Luthien" – for the Elf maiden in question was inspired from her)
Posted by Ian E.S. Adler at 6:44:00 AM No comments: