The Role and Proper Usage of Magic Thingamajigs

There is often a general complaint that, all too frequently, Fantasy protagonists rely overmuch on Magical Thingamajigs to save their highly sought after skins from the Dark; and in poorly written Fantasy literature this may easily be the case. However, any Fantasy author worth half a wizard's robe knows that such Magic Thingamajigs must supplement the user, not the other way around.

In short – and like magic itself – there must always be a price for using such arcane items; a price that the protagonist must be willing to pay, having already weighed it against the dangers of not using the Magic Thingamajig. In even shorter terms, all arcane items should be subject to the idiom "a double edged sword."
Here are six examples of such Magic Thingamajigs, all different from each other and yet all subject to the above idiom. 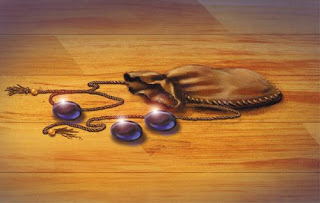 Elfstones: From Terry Brooks' Original Shannara Trilogy, the Elfstones are three blue stones of old Elvish magic that can only be used by those of sufficient Elvish blood. While immensely powerful, the stones may only be used as a weapon against magical creatures and there usage will alert all other magic-users in the area (and sometimes beyond) to the location of the wielder. Furthermore, the strength of the Elfstones, while again naturally strong, will partly depend on the will of the wielder. Gifted to the Ohmsford family by the mysterious Allanon, both Shea and his brother Flick along with the former's grandson Wil can confirm that the Elfstones should only be used in dire peril and when no other reasonable option is available.

Need: "Woman's Need calls me, as Woman's Need made me. Her Need will I answer as my maker bade me." An enchanted and at least somewhat sentient sword from Mercedes Lackey's Valdemar books, Need is dedicated to the overall protection of all women as well the general wellbeing and self-sufficiency of its (also female) wielder. For example, and as need requires (pun not intended), it will make a mage a temporary swordmaster and, alternately, a fighter immune to all magic. But Need will let its wielder die if bested by their own craft. It also has an attitude problem and any who come to overly rely on the blade will likely end badly. Moreover, and as Kethry & Tarma & Warrl (and Kerowyn) could testify, Need is as much a hindrance as a help, and probably nearly got them both killed more than it saved them. Finally, only women can wield her. (There is more, of course, but I do not want to spoil the books) 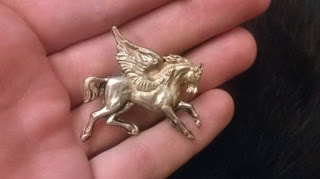 Green Rider brooches: Clip clop clip clop clip clop....hoofbeats... From Kristen Britain's Green Rider Series, the brooches of the Green Riders of Sacoridia, finely wrought in the shape of a Pegasus and made of gold, are perfect examples or how just a little individual magic can go a long way (though, depending on the specific brooch, it may be more than just a little). In short, and for fear of spoilers, each Green Rider brooch possesses a single power which it then grants to its wearer, but at a cost. Rider Karigan G’ladheon, for example, can (at least, hehehe) use hers to turn invisible, but the price is splitting headaches. Naturally there is much else, but the brooches are more central to the Green Rider Series than typical of Magic Thingamajigs and the greater complexity that entails means I must be doubly cautious of giving out spoilers. Clip clop clip clop clip clop....hoofbeats... 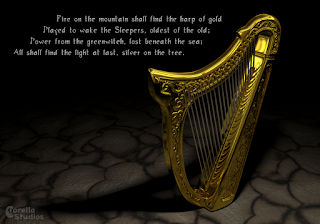 The Harp of Gold: One of the four Things of Power from The Dark is Rising Sequence by Susan Cooper. The Harp is a potent artifact of the High Magic of the Cosmos, and whoever plays the Harp creates generates a High Magic field the effect of which negates any nearby magic. The problem – as Will Stanton, Bran Davies, and the white dog Cafall found out – is that the protection only lasts so long as the Harp is actually being played (hence serious finger strength in required) and that its usage alerts all magic forces in the area to the users location.

The Bells: "Does the walker choose the path, or the path choose the walker?" A key component of Garth Nix's Abhorsen Series, these sets of seven bells are the tools of both Necromancers and the Abhorsens who work to counter them. Used to either bind or raise the dead, each of the seven bells has a different name and function, effectively making each a Magic Thingamajig unto itself. They are Ranna the Sleeper, Mosrael the Waker, Kibeth the Walker, Dyrim the Speaker, Belgaer the Thinker, Saraneth the Binder, and Astarael the Sorrowful. As Sabriel and Lirael could tell you, these bells are perilous as a rule and each more dangerous to use than the last (more or less), for they are tricksome and will seek to ring of their own accord and/or off-key so as to harm the ringer (hence a steady hand and steadied nerves are a must before ringing). The Abhorsen's set of bells are silver with mahogany handles, while ordinary necromancers' sets are often made of bronze or silver with handles of ebony or bone (a fact which the cover artists tend to ignore). 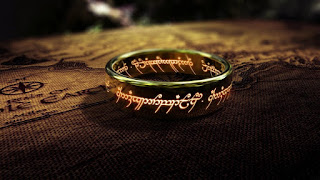 The One Ring: "One Ring to rule them all, One Ring to find them, One Ring to bring them all, and in the darkness bind them." The Ring from J.R.R. Tolkien's The Hobbit and The Lord of the Rings; I am fairly certain we all know the quirks and perils of this most dangerous of Magic Thingamajigs, so I shall be brief. Wearing it renders the user invisible, but often leaves the ghost of a shadow behind – particularly when in direct light. But be wary, for the Ring is altogether evil and will alert and generally draw the servants of the Dark Lord Sauron (as well as other foul and nameless things). Invisibility does have its uses, but the continued use will make the bearer gradually more protective of it until said protectiveness becomes a jealous madness of addiction. (There is more, of course, but I do not want to spoil the books just in case a few readers have committed the criminal act of not reading Tolkien.)

The Three: "Three for the Elven-Kings under the sky." It is seldom properly credited, but J.R.R. Tolkien actually invented twenty Rings of Power and, after from the One, it is the Three Rings of the Elves that are most worthy of note. They are Narya (called Narya the Great, Ring of Fire, and the Red Ring), Nenya (called Ring of Adamant, Ring of Water and the White Ring), and Vilya (called Ring of Air, Ring of Firmament, and the Blue Ring). These Rings are not military weapons nor even made for the purpose of war as the One was, but rather – aside from individual quirks – were uniformly wrought to preserve the beauty and lore of the Elder Days by blocking evil forces and preventing the great decayer that is Time from having an effect. Their bearers I shall keep secret, save only in saying that each is a key character in The Lord of the Rings. The price is that, like all the Rings of Power, they are subject to and dependent upon the dark strength of the One Ring (I shall hold back further details, as that knowledge is a prize owed only to true Tolkien scholars – such as, in my not always humble opinion, myself).


Other examples, such as the Alethiometer and the Stone of Jas, I will not speak of period save in name, for their very nature is cloaked in spoilers. One must needs read Philip Pullman's His Dark Materials trilogy to learn of the former, and become a veteran player of the MMORPG (computer) game RuneScape to delve into the latter. This is not all, of course, and I could talk at length about items such as the Orb of Aldur and the Bhelliom from David Eddings' series The Belgariad and The Elenium, but they are of a special nature and also steeped in spoilers (especially the latter), so I shall end here.