Ilvermorny School of Witchcraft and Wizardry

J.K. Rowling is truly the heir of Tolkien, so vast, deep, and complex is her Wizarding World universe!!

On Pottermore she just revealed, at long last, the North American school of magic (located in Massachusetts upon Mt. Greylock) - complete with a Sorting Ceremony for four completely new Houses.


"It is sometimes said of the Ilvermorny houses that they represent the whole witch or wizard: the mind is represented by Horned Serpent; the body, Wampus; the heart, Pukwudgie and the soul, Thunderbird. Others say that Horned Serpent favours scholars, Wampus, warriors, Pukwudgie, healers and Thunderbird, adventurers"


(Rowling just said (and I quote) "there is no equivalence between Hogwarts and Ilvermorny Houses.")

For myself, I was sorted into the Horned Serpent. (My Hogwarts House is Ravenclaw)
Posted by Ian E.S. Adler at 7:57:00 PM No comments:

OK, I admit it, it is hardly witty or original to post something from another website. Then again, imitation is the highest form of flattery, as is said, and the Elven Yoda in Christopher Paolini’s Inheritance Cycle is simply awesome.


I will, however, add this - something which, in my not always humble opinion, Shurtugul.com should have said: DO NOT try the poses Paolini describes in the book. They are meant for Elf (not Human) bodies.

See link below for the full article.

Some proverbs are stranger than others, or more potent both in their meaning and that they may require more thought to work out. And some are strange and potent.
Still, one generally does not expect a talking wild boar called the Lord of Wisdom to be the one to give it. Then again, Patricia A. McKillip seldom does what one expects.

"The giant Grof was hit in one eye by a stone, and that eye turned inward so that it looked into his mind, and he died of what he saw there."
- Cyrin Boar
Posted by Ian E.S. Adler at 7:19:00 PM No comments:

Somebody once told me that only I would write Breakup statuses about fantasy books... 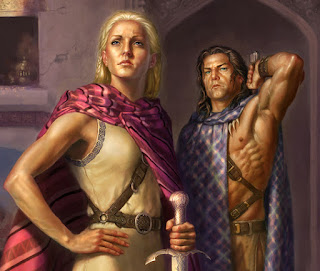 Well, here is one for a Fantasy series I quit several months ago (in March):
It was nice Novels of Tiger and Del by Jennifer Roberson, but - while you had great characters, good magic, were well-written and boasted a unique universe - your plot lacked proper depth and complexity (at least for me). I therefore dump you...in the pile of books to sell.
Posted by Ian E.S. Adler at 1:14:00 PM No comments:

A little nugget of world-and-character-building wisdom from Mercedes Lackey who, in my not entirely humble opinion, ranks right up there with Philip Pullman and Susan Cooper as among the finest of Fantasy authors.

"I try to keep my world as solid and real as possible; people deal with stubborn pumps, bugs in the porridge, and love-lives that refuse to become untangled, right along with invading armies and evil magicians. And I try to make all of my characters, even the ‘evil magicians,’ something more than flat stereotypes. Even evil magicians get up in the night and look for cookies, sometimes." - Mercedes Lackey
Posted by Ian E.S. Adler at 4:46:00 PM No comments:

Tis a wonderful thing when a Greek philosopher (whose tomb was just uncovered) speaks fondly of a passion of mine.


"Good riddles do, in general, provide us with satisfactory metaphors; for metaphors imply riddles, and therefore a good riddle can furnish a good metaphor." - Aristotle

Indeed, riddles and Riddle Games are not mere tools, mere elements, of mythology and Fantasy literature alone. Professor Archer Taylor of Pennsylvania, a a seminal proverb and riddle scholar and folklorist, says that "we can probably say that riddling is a universal art" and cites riddles from hundreds of different cultures including Finnish, Hungarian, Native American, Chinese, Russian, Dutch and Filipino sources amongst many others. Riddles have been characterized as one of the most important forms of oral art in Africa.


According to Archer Taylor, "the oldest recorded riddles are Babylonian school texts which show no literary polish," such as the riddle:
My knees hasten, my feet do not rest, a shepherd without pity drives me to pasture = ?

I, personally, disagree with him as, per my own Riddle Maker mind, I judge the above riddle as perfectly respectable. My only grievance is that the answer was not preserved! AUGH!!

Anyway,  regards to Fantasy books, many authors put concept of riddles and Riddle Games to use. J.R.R. Tolkien hosts a famous one between Bilbo and Gollum in The Hobbit.
In The Grey King, the third book of Susan Cooper's fantasy sequence The Dark is Rising, Will and Bran must win a riddle game to gain a...special power necessary for the Light in their war against the Dark.
In Stephen King's The Dark Tower III: The Waste Lands and The Dark Tower IV: Wizard and Glass, the ka-tet must riddle against Blaine the Mono in order to save their lives. (Of course, seeing as I have read neither of these books, this is only a secondhand account)

But, in my not entirely humble opinion, no Fantasy author makes better use of riddles than Patricia A. McKillip in her books The Forgotten Beasts of Eld and The Riddle-Master trilogy.
In the latter, the ancient art of riddlery is taught at the College of Caithnard - the study based on books recovered from the ruins of the School of Wizards. The riddles in the series are composed of three parts - the question, the answer, and the stricture - and are both a way of recording history and a guide to living life. Riddles play a crucial role in the series, the main protagonist, Morgon of Hed, beginning his journey by winning the crown of the kings of Aum in a Riddle Game with the ancient ghost of Peven of Aum; Peven had a standing wager going that no one could win a riddle-game with him, and those who lost against him forfeited their lives. (This is not a real spoiler, as the reader learns all this and more within the first chapter or two)
"Beware the unanswered riddle."