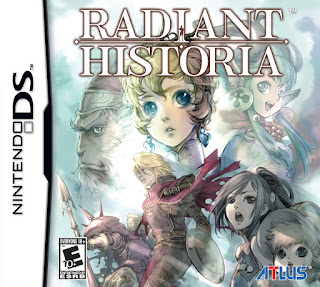 Radiant Historia...a gameboy game with a book-worthy storyline, character you love, and a moral lesson that you never forget. I just finished it. Thank you Raynie, Marco, Aht, Rosch, Gafka, Eruca, Sonja, Kiel, Viola, Lippti & Teo.... And above all, Stocke. Thank you for your lesson and commitment to your friends.

Like the best books, it was one of those games that stay with you. Yet I was never wholly satisfied with the ending, not because it was not well done but rather due to the fact that the wound causing the desertification was again bandaged instead of healed – and at great cost. A 'solution' Stocke was frustrated by long before the price was paid. 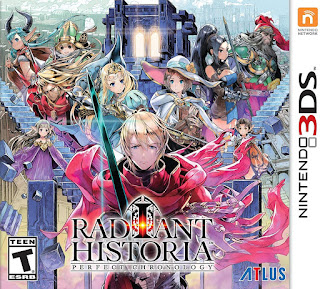 Well, now it is time to see if that changes, for I just began Radiant Historia: Perfect Chronology, the remake of the original. As I said in my first post on the matter, I am less than thrilled with the redesigned artwork, but this not enough by a longshot to stop me seeing if, this time, history will play out the way it truly should. Whether this really is a perfect chronology. Already I see slight different, and one major one upon who I have placed a large amount of hope: the mysterious historian Nemesia. As Lippti said, "Countless possibilities fade into the darkness. Yet there exists a razor-thin path of light." A path I am determined to find so as to avoid the price paid before or, if paid it must be, make it heal instead of bandage the wound. To, in the long term, prevent the sands from engulfing everything.

It appears that the phrase "take the black" meant something in Fantasy before GRRM's admittedly brilliant use of it regarding the Night's Watch. Back in 1976, to "take the Black" at the College of Caithnard means one has achieved the highest rank of riddle-mastery, for there Riddle Masters wear black robes. (How I had forgotten this fact I do not know.)

What is the first and last rule of riddle-mastery? Answer the unanswered riddle. 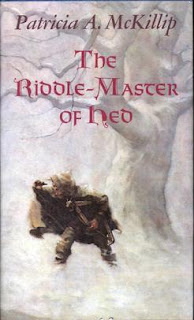 "Beware the unanswered riddle."
I just started The Riddle-Master of Hed, book #1 of Patricia A. McKillip's Riddle-Master Trilogy.
After that brief touch with the grimdark, I feel a need to cleanse my soul - and I know of no better way that by re-reading this classic series. Tis an absolute delight returning to the High One's realm where the ancient art of riddlery is taught at the College of Caithnard, and seeing such dear friends as Morgon of Hed, Deth, and Raederle of An again. Indeed, this series has a special place in my heart, for here McKillip taught me the fifth kind of riddle (and, as everyone knows, riddles are my stock-in-trade).
"Beware another riddle-master."
Posted by Ian E.S. Adler at 3:35:00 PM No comments:

I am stopping the grimdark Monarchies of God by Paul Kearney 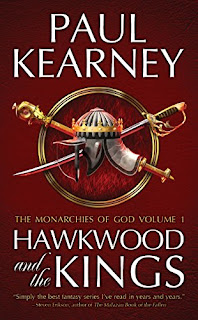 Well, that was unfortunate yet not quite unexpected. Time to do that which I have only done twice before: quit a Fantasy series and consign it to the literal recycle bin.
Yes, I am stopping Monarchies of God by Paul Kearney, the series I began two days ago, as sadly my suspicions were more than borne out. After GRRM, I can smell the grimdark and this more than well-written Fantasy rewrite of the effects of Fall of Constantinople combined in dark union with the Spanish Inquisition and Christopher Columbus' 'discovery' of America reeks of that cynicism which I so utterly despise and is so aptly named the Treason of the Intellectuals.

Good riddance. (And yes, I am literally going to toss this filth into the recycle bin.)

I can hear you saying, "Ian, by your own admission you started to book two days ago. How can you say such things, make such strong accusations, so quickly?" My answer: research. Those two days prompted me to Google whether Monarchies of God is classified as grimdark, for I was uncertain seeing as it came out before A Song of Ice and Fire essentially created and lionized the sub-genre. 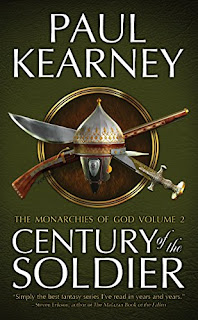 What did I find? Well, the Wikipedia page dedicated to it says "the series is noteworthy for its ruthlessness in dispatching major characters...[and] has also been criticized for its pessimism." Ring a Westerosi bell? Beyond this, many Fantasy websites and Reddit users classify it as a lighter form of GRRM while still unquestionably grimdark. Yet the last straw was an interview of Paul Kearney, namely a specific question asked and the author's answer:
Question: "Another observation is that there’s very strong melancholy in your protagonists – Hawkwood, Corfe, Rol. They are often forlorn and sad if determined. What is the reason behind that? Is there some part of Paul in the books’ heroes?"
Kearney's answer: "Possibly. I do not believe that mankind is basically good with a few bad apples in the barrel. I believe that mankind is intrinsically weak and selfish and will happily indulge evil, provided it does not interfere with everyday life. Some shining exceptions exist, but they are by definition not the rule. So for those who have some experience of the world outside their comfortable little box, this is a given. Life is hard. It makes you pay. You must struggle merely to survive. I guess that attitude bleeds into my characters."
An answer/belief which is, like the grimdark it spawns, the complete and utter antithesis of the Spirit of Tolkien in addition to being an almost dictionary definition of the Treason of the Intellectuals. By rights all who espouse such cynical tomfoolery should feel the full force of my contempt so hard as to frost their windows.
Posted by Ian E.S. Adler at 1:04:00 PM No comments:

Just started Hawkwood's Voyage, book one of the Monarchies of God by Paul Kearney 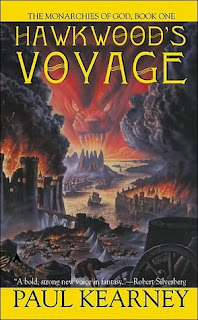 Just started Hawkwood's Voyage, book one of the Monarchies of God by Paul Kearney.
I will not lie: I have grave suspicions regarding this series as it reportedly toes the line of and even crosses into the grimdark – so, unlike with other books, I make no unspoken vow to finish it. That said, it starts with a bang for something stirs in the depths even as religious warfare has felled the Holy City of Aekir. (Hopefully I do not regret this, but it has sat unread, untested, on my shelves for too long.)
Posted by Ian E.S. Adler at 12:06:00 PM 1 comment:

I just finished The Sacred Hunt Duology by Michelle West 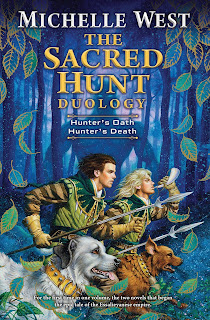 Sound the silver horn, call the hunt.
I just finished Hunter’s Death, the second book of The Sacred Hunt Duology by Michelle West.
Duty is a hard master, requiring sacrifice no less than and often because of love - which of course is what in the end makes the duty worthwhile and noble. Duties driven by love-born oaths freely given, responsibilities and cares willing taken. By such oaths was Dark God Allasakar pushed from the mortal plane, by such sacrifices willingly made. Breodanir and the City of the Twin Kings is safe. The Hunter's Price is paid.
Thank you and well done Stephen and Gilliam of Elseth, Evayne, Kallandras, Meralonne Aphaniel, Jewel Markess, Torvan and Devon ATerafin, The Terafin, Espere, Zareth Kahn, Princess Mirialyn ACormaris, Lady Elsabet of Elseth, Soredon and Norn of Elseth, and last but not least Cynthia of Maubreche.
Posted by Ian E.S. Adler at 12:24:00 PM No comments: 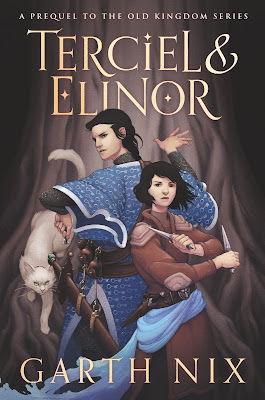 Terciel and Elinor comes out this November, and if the cover is any judge it looks amazing. What I find interesting is that Mogget is in the form of a cat here. Terciel told Sabriel that Mogget always took the form of an albino dwarf boy with him; as I recall, he was unaware of Mogget's name and that he could become a cat.

Email ThisBlogThis!Share to TwitterShare to FacebookShare to Pinterest
Older Posts Home
Subscribe to: Posts (Atom)
"The realm of fairy-story is wide and deep and high and filled with many things: all manner of beasts and birds are found there; shoreless seas and stars uncounted; beauty that is an enchantment, and an ever-present peril; both joy and sorrow as sharp as swords."
- J.R.R. Tolkien