C.S. Lewis called him "Tollers" during their lifelong friendship. Bow before this incredible mind that is vast beyond the thoughts of elves and mortals. Class and genius and (dry) humor epitomized, Professor Tolkien compares the learning and crafting of new languages to new, fine wines. Indeed, he invented the world of Arda (Middle-earth & Undying Lands) simply to give his invented tongues a home.
I cannot put my admiration of this man into mere human words.


(This video is from the BBC Archive)

The languages were the first thing Tolkien created for his mythos, starting with what he originally called "Qenya", the first primitive form of Elvish. This was later called Quenya (High-elven) and is one of the two most complete of Tolkien's languages (the other being Sindarin, or Grey-elven). The phonology and grammar of Quenya are strongly influenced by Finnish, Latin, Greek and elements of ancient Germanic languages, and Sindarin is strongly influenced by Welsh.
Posted by Ian E.S. Adler at 11:15:00 AM No comments:

I just started The Witch's Boy by Kelly Barnhill 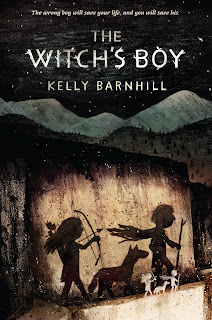 After reading an old joy it is best to then read something new and unique. Thus I just started The Witch's Boy by Kelly Barnhill, a single-standing Fantasy that already burns with an ancient yet charming and potent power right out of fairy tales and antiquity.

Thank you Caitlin for suggesting this back in college 🙂 I swiftly bought, never forgot, and am already hooked on this truly unique and clearly heartfelt book.
Posted by Ian E.S. Adler at 10:58:00 AM No comments:

I once again finished The Lord of the Rings trilogy by J.R.R. Tolkien

Thus once again I have and to my joy finished The Return of the King and with it The Lord of the Rings trilogy by J.R.R. Tolkien. The book to which I owe so much: my love of reading, my interest in myths and legends, the mithril-plating upon my moral backbone.

To this masterwork that is my DNA writ in ink and awe, I quote the illustrator Ted Nasmith, who once flawlessly described the wonder and power of this book that is the Father and Founder of the Fantasy Genre in but a single sentence: "It opened up in me a dormant love of lost and misty times, myth and legend."
Truly and for me as well, as before my father convinced me to let him read it to me aloud I hated reading.

And now, for the first time since before high school, it is done again, and I am filled with awe-anew for now I pick up much that I had missed before and my regard of Tolkien climbs higher still.

Until next time my dearest friends. I would say a longer goodbye save for the fact that if there if one thing in my life that is certain it is that I will see you all again. Maybe next year or ten times that, but it will occur.


"Roads go ever ever on,
Under cloud and under star.
Yet feet that wandering have gone
Turn at last to home afar.
Eyes that fire and sword have seen,
And horror in the halls of stone
Look at last on meadows green,
And trees and hills they long have known.

The Road goes ever on and on
Out from the door where it began.
Now far ahead the Road has gone.
Let others follow, if they can!
Let them a journey new begin.

But I at last with weary feet
Will turn towards the lighted inn,
My evening-rest and sleep to meet.

Still round the corner there may wait
A new road or a secret gate,
And though I oft have passed them by,
A day will come at last when I
Shall take the hidden paths that run
West of the Moon, East of the Sun.”

I have always been a passionate fan of the Fire Emblem video game series, for the stories are book-worthy and full of characters who I truly came to love and care about. Thus I am thrilled to say a new game, Fire Emblem: The Three Houses, is in the works. A whole new would is this, so a toast to friends not yet made and battles only a true master tactician can win!