As 2019 rolls away I think it is only fitting to look back on this year's accomplishments:

(I guess I was wrong last year about my reading The Wheel of Time shortening the New Year's Eve list. Still, the real question is next year as Dad and I are basically out of McKillip books.)
Posted by Ian E.S. Adler at 5:00:00 AM No comments:

I have just started The Path of Daggers 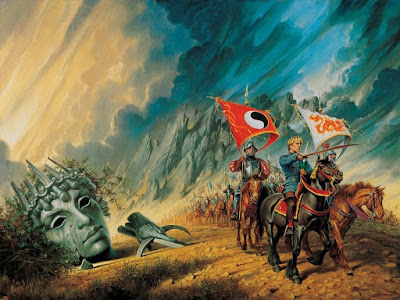 I have just started The Path of Daggers, Volume #8 of The Wheel of Time by Robert Jordan.
At last the Borderlands stir, those who know Trollocs as more than myth and fight the Shadow at every turn. Yet suspicion is rife on the winds and the Dragon Reborn must prove himself to those bound together by ties of blood and battle and oaths stronger than Power-made steel. Furthermore, Verin Mathwin continues to very quietly prove herself to be what I always thought, one of the most dangerous Aes Sedai alive. Yet as the returned Seachan say, "on the heights, all paths are paved with daggers." As the Prophecies of the Dragon say, "Master of the lightnings, rider on the storm, wearer of a crown of swords, spinner out of fate. Who thinks he turns the Wheel of Time, may learn the truth too late." 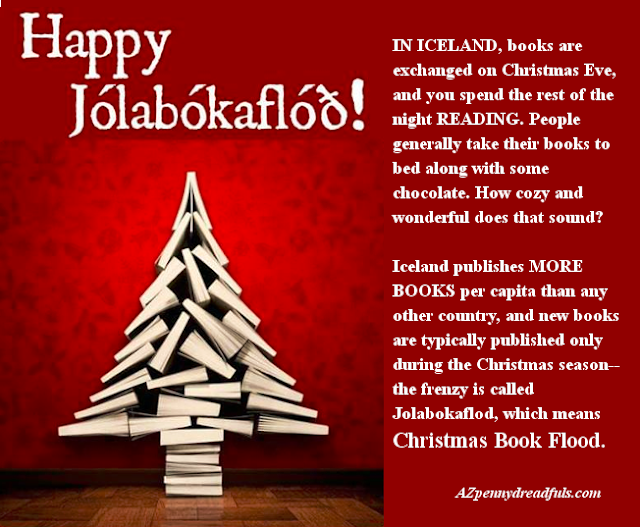 I have just finished A Crown of Swords,

I have just finished A Crown of Swords, Volume #7 of The Wheel of Time by Robert Jordan. I am now halfway through the series.
So it is that the Golden Bees have fallen to and as the Dragon Reborn freed them from the Destroyer of Hope, and in gratitude for a kindness forgotten adored his head with laurels. So it is that, per the Jendai Prophecies, he is acknowledged Coramoor by a Atha'an Miere Wavemistress as the Servants of All serve him well. Meanwhile, the One Man rescues and is bound to his dear one, the true Flame of Tar Valon makes progress within her own ranks, and the Bowl of the Winds is found amid dust, blood, and rising friendships. Just in time for the others from beyond the Aryth Ocean to return with chains as new figures emerge from the Shadow.

The title says it all. While nothing can take one to another world and fire the imagination like a book can, music stirs the cauldron of our soul no less (which why it is such an integral element of the Fantasy genre), and this musical/magical journey is one I never tire of tacking.

My father and I just finished Wonders of the Invisible World

My father and I just finished Wonders of the Invisible World by Patricia A. McKillip, the second of her three books of short stories.
At this point there is little more I can say about just how good McKillip is, but this book taught us that she is far more flexible regarding her writing style than we have long thought.
Posted by Ian E.S. Adler at 7:06:00 PM No comments:

The Boy Who Drew Cats

Magic: the Gathering's Throne of Eldraine set has reawaked in me an interest in fairy tales; and no, I am not ashamed about in the slightest because, to quote C.S. Lewis, "When I was ten, I read fairy tales in secret and would have been ashamed if I had been found doing so. Now that I am fifty, I read them openly. When I became a man I put away childish things, including the fear of childishness and the desire to be very grown up." Not that I am fifty nor was ever really embarrassed at ten, but one gets the idea. Anyway, I am going to start posting about the odd, lesser-known fairy tales as well as all else, with a particular focus on those whose themes and/or titles remind one of commonly known ones.

To begin, we all grow up hearing about the The Boy Who Cried Wolf. But what about The Boy Who Drew Cats? A Japanese fairy tale, the story is as such: 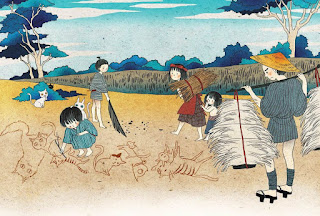 A farmer has many children, who are all hard-working, except for his youngest, who is small and weak and only interested in drawing pictures of cats. He decides his son is not cut out to be a farmer, and sends him to a temple to study with a priest. The boy spends all his time drawing cats instead of studying. The priest tells him he's better suited to being an artist and should return home. As he sends him on his way, the priest warns the boy: "Avoid large places at night. Keep to the small." 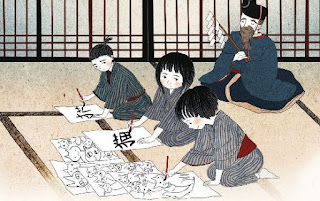 Ashamed of being dismissed, the boy decides not to return to his father's farm. Instead, he travels to another temple in the hopes he can ask for a night's shelter, not realizing all the priests living there have long-ago been driven away by a giant goblin-rat. When the boy arrives, he finds the place deserted and decides to draw cats on the walls. As he begins to feel tired, he remembers the old priest's words and climbs inside a little cabinet to go to sleep.  During the night he hears horrible sounds of screaming and fighting. 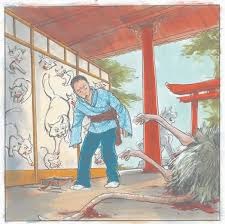 When morning comes and he finally climbs out, he discovers the corpse of the goblin-rat. As he wonders what could have killed it, he notices that all his cats now have blood on their mouths. He is hailed as a hero for defeating the monster, and grows up to be a famous artist - one who only draws cats.


This is just a summary of course, yet one of what I deem to be a charming story. A fairy tale whose lesson is no less clear than that of the justly famed The Boy Who Cried Wolf. A lesson which, I think, is captured by a quote from Sir Philip Pullman: "You have to go with the grain of your talent, not against it. If your talent is inert and sullen in the face of business or politics...but takes fire at the thought of ghosts and vampires and witches and demons then feed the flames, feed the flames." In this case the boy's talent took flame at cats and the priest in the story was right; the boy was meant to be an artist and that skill served him well (albeit in an initially atypical manner). As mythologist Joseph Campbell says, "follow your bliss," which is a lesson everyone should take to heart.