I have just begun the The Red Fox Clan, book #2 of the Ranger's Apprentice: The Royal Ranger series by John Flanagan 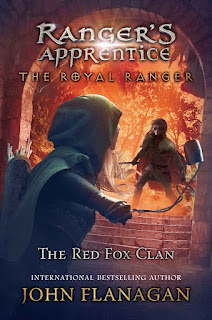 Six years ago I finished the The Royal Ranger, the 12th and final book of the Ranger's Apprentice series by John Flanagan. One of my absolute favorites as well as one of the first Fantasies I ever touched, it had given me 8 years of joy and uproarious laughs. I thought it was the end. Then came the Ranger’s Apprentice: The Early Years duology detailing how Halt and Crowley saved the Corps and Kingdom by getting the drop on Morgarath. Then two years ago (i.e. when I was still reading The Wheel of Time) at a bookstore I saw it. The Red Fox Clan, book #2 of John Flanagan's new Ranger's Apprentice: The Royal Ranger series which is nothing less that an entire sequel series to the now-old book #12 of the main Ranger's Apprentice series (now book #1 of the new)!
The Royal Ranger was not the end, but A New Beginning (as it is now officially titled), and now I return to dear old friends for more adventures as I have just begun The Red Fox Clan, book #2 of the Ranger's Apprentice: The Royal Ranger series by John Flanagan. Hello again Ranger Will Treaty and apprentice Maddie, Sir Horace and Princess Cassandra, Halt and Gilan! New enemies arise and the Kingdom is once more at stake, this time in a more personal manner.
Posted by Ian E.S. Adler at 12:05:00 PM No comments:

My father and I just started Piranesi by Susanna Clarke 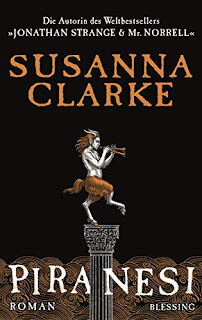 My father and I just started Piranesi by Susanna Clarke, her first novel since her masterwork Jonathan Strange & Mr Norrell.

In a House that is the World, where an Ocean's tides thunder and crash or gradually flow through and across statue-lined Halls and staircases, mystery – and a possible Great and Secret Knowledge – abounds. Truly this already promises to be a standout even among unique books, comparable to Diana Wynne Jones herself.

I have just finished Firebrand, book 6 in the Green Rider series by Kristen Britain

clip clop clip clop clip clop....hoofbeats...
I have just finished Firebrand, book 6 in the Green Rider series by Kristen Britain.
The future is determined by many, but only by the actions of one may the dark future be prevented. Loose ends were tied up, daring rescues made, and enemies felled if at great, torturous, cost, while the gods and strange allies play their long games at risk. Yet for all it was a great victory, Sacoridia will not be safe until Mornhavon the Black and the odd threat of the Sea Kings is dealt with. War is coming, but thankfully the p'ehdrose fight with the old alliance.
Stellar work and full healing, mental and physical, to you, Chief Rider Swordmaster Sir Karigan G'ladheon. Until next time.
clip clop clip clop clip clop....hoofbeats... (receding into the distance)
Posted by Ian E.S. Adler at 2:00:00 PM No comments:

Those days you did not intend to spend all of reading but do so anyway are some of the best days.

Growing up reading Fantasy and mythology coupled with having parents who raise one to genuinely despise profanity and other forms of crude language is a blessing. Why? Because in place of such base and/or simplistic words, one learns to be creative. I say "silence" and, in place of swear-words, oaths like "Thank the flame", "Gods and sacred Goddesses", "Fire and hemlock!" "Darkspawn", "Freya's tears", "By all the gods above and below the Earth", "Sacred flames!" and, when in physical pain, "Bones, body, and blood!". In other words, having one's manner of speech and style of writing forged by binge-reading Fantasy literature works out great! Even my mother says "Thank the flame" now, though her personal favorite is that time I swore "By Odin's empty eye socket!" (I was reading The Sea of Trolls trilogy by Nancy Farmer at the time, I believe, which is filled with oaths invoking the Norse gods. In fact, that is where the "Freya's tears" swear comes from. As to the rest, the "Fire and hemlock!" oath came from the Diana Wynne Jones' book of the same name, and "Thank the Flame" from Tolkien in that, back in middle school, when happy I would say "Thank the Flame or Anor" and when upset "By the dark fire of Angmar!" – i.e. "Thank the Flame" is a contraction of the former.)

Quote of the month

"The young must grow old,
Whilst old ones grow older,
And cowards will shrink,
As the bold grow bolder.
Courage may blossom in quiet hearts,
For who can tell where bravery starts?
Truth is a song, oft lying unsung,
Some mother bird, protecting her young,
Those who lay down their lives for friends,
The echo rolls onward, it seldom ends.
Who never turned and ran, but stayed?
This is a warrior born, not made!
Living in peace, aye many a season,
Calm in life and sound in reason,
'Til evil arrives, a wicked horde,
Driving a warrior to pick up his sword,
The challenger rings then, straight and fair,
Justice is with us, beware. Beware!"
- Brian Jacques
Posted by Ian E.S. Adler at 9:35:00 AM No comments: