The End of Shannara 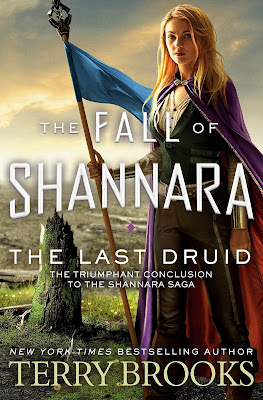 Exactly one month ago, on October 20, the Fantasy genre was shaken to its core as an age came to an end for, on that date, The Last Druid by Terry Brooks was published – the final volume of his ominously titled Fall of Shannara series and with it the conclusion of Shannara saga. It sounds simple, just another series completed, but to fully appreciate this one has to go back in time to before the Golden Age of Fantasy and ask how the Fantastic went from fringe genre to a keystone of popular culture. The answer, unsurprisingly, begins with J.R.R. Tolkien. No one denies that Fantasy literature owes its bones to The Lord of the Rings; it essentially swamped all previously written works of Fantasy, and it unquestionably created "Fantasy" as a marketing category. Indeed, all the greats cite Tolkien as a defining influence, from GRRM to Jones, from Rowling to Paolini, from McKillip to Gaiman. Knowing that Tolkien came first, you cannot read any other books without seeing his hand-print. Indeed, in the immediate years following LOTR, its popularity created an enormous number of Tolkienesque works, but nothing that quite captured it. People wanted, were dying for, another The Lord of the Rings!

Then, in 1977, Terry Brooks' The Sword of Shannara came out. Some now call the it a LOTR imitation, but I disagree utterly; it is Tolkienesque, for a certainly, yet is its own story and the Four Lands has a history/lore unique to that of Middle-earth and populated by engaging characters; furthermore, to call the two subsequent books in the Original Shannara Trilogy LOTR imitations is nothing short of madness. Regardless, however, the key fact is that Brooks' was breakthrough success that publishers had been yearning for: the first true master Fantasist since Tolkien, and Shannara became the first Fantasy novel to appear on, and eventually top the New York Times bestseller list. As a result, the genre saw a boom in the number of quite popular titles published in the following years, such as Terry Pratchett's Discworld. Then came The Farseer Trilogy by Robin Hobb (which is one my to-read list) and The Blue Sword and its companion The Hero and the Crown by Robin McKinley.