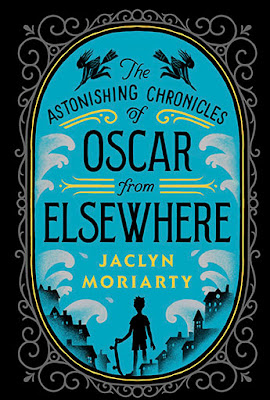 My father and I just finished The Astonishing Chronicles of Oscar from Elsewhere by Jaclyn Moriarty, the fourth and final book of her Kingdoms and Empires Series.

I cannot stand it. A double sentiment here, firstly because it is over and secondly since I said this any numbers of times as we read it. For this book is a celebration of everything that makes the Kingdoms and Empires great! Like book one it was a madcap adventure that went beyond the mere whimsicality to the point of a nearly new sub-genre of Absurdist Fantasy, but with the poignant emotion depths of book three and written in the beautiful back and forth narrative of book two. (I mean come on, whoever heard of questing to save an Elf City from their own king-choosing ritual gone wrong that even gone right risks collective mass death?) Better yet – we were JONESED! – for not only did Moriarty continue to channel the great Diana Wynne Jones, she played a trick that had us howling at the ceiling and pounding the bed in mad delight summarized by the words "I cannot stand it" and "just another day in the Kingdoms and Empires." Days we will miss, for reading this series was almost like getting Jones back. An utter, grinning ear-to-ear and groaning joy filled with all the unexpected tricks of bright magic.

We already miss you so much Bronte Mettlestone and the Mettlestone-Staranise sisters Astrid, Esther, and Imogen; Oscar from our world, Alejandro, Finlay, Honey Bee and rest of the Children of Spindrift, the various Mettlestone Aunts. The K&E Alliance is blessed to have you.

(By the way, Jaclyn Moriarty obviously had WAY TOO MUCH FUN writing this series!)

Just started Sword-Bound, volume seven of the Novels of Tiger and Del by Jennifer Roberson 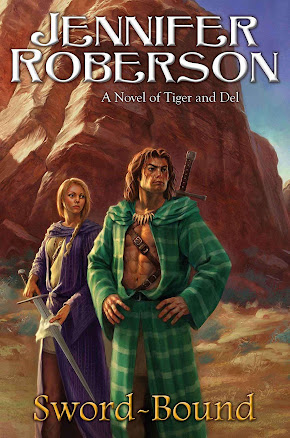 He was Tiger, born of the desert winds. She was Del, born of ice and storm.

Just started Sword-Bound, volume seven of the Novels of Tiger and Del by Jennifer Roberson.
Domesticity definitely agrees with the Sandtiger and Del, but a little adventure to sharpen skills could not hurt, could it? Oh no. Because half the sword-dancers of the South are totally not still hoolies-bent on killing them (or at least Tiger), and other half absolutely do not want to drag Tiger (and probably Del too) before Umir the Ruthless. What could possibly go wrong? Knowing these two, everything, but it is still an absolute joy to rejoin them and see how often they get captured and escape. Time to step into the circle once again.

(Yes, I know I said I would pick up Sword-Bound upon completing the Lumatere Chronicles, but I tore through it with time enough to spare to for the Nine Realms, and then I had to fulfill a very pleasant promise to J.V. Hillard by reading Vorodin's Lair. Still, tis only February. Seems I am a faster reader than I thought.) 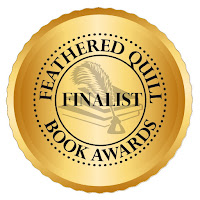 Actually, I had forgotten that The Last War was even in the running for The Feathered Quill 2023 Book Awards 😅 So learning that my book was a Finalist in the Fantasy category is a pleasant surprise. 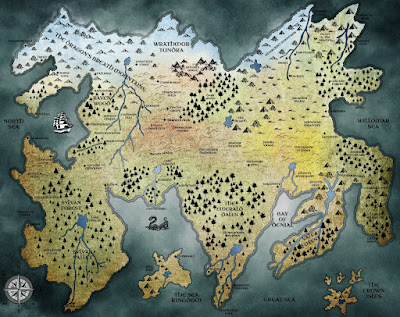 “Crimson flags borne on horses of white, see them ride, ye children of light." – The Ballad of Eldwal

The arrows of war are given as the realm of Warminster lurches like the Antlered Man into a conflict born of vengeance, treachery, and the blackest magic imaginable. I said in my first Official Book Review that J.V. Hilliard's mastery of Fantasy lies in taking known if rarely used elements of the genre and merging them into a by extension brilliantly unique tale. A trend that continues, this second book adding cryptids and cryptid-worshiping cults not unlike those of H. P. Lovecraft's Cthulhu Mythos, necromancy seldom seem beyond Dungeons & Dragons, and honorable, blunt, and warlike Norsemen. Thus hope remains for Warminster even as treason raises its skeletal head on all sides, for answers were found in Vorodin's Lair, Daemus Alaric succeeded in his rescue mission, and Princess Addilyn Elspeth and Sir Ritter Valkeneer ride to rally the land against the true threat, a dark alliance, from the mysterious Dragon’s Breath Mountains. May Erud's light guide them.

"The face of despair appears invincible, but in time, it always fades." – Warminster the Mage

As a school librarian, this year I have taught my students Riddle Mastery via a giant computer/TV screen positioned in the library, something I have never done before. In the past as an After-school teacher and camp counselor I always naturally had my own group/class which I directly interacted with in the manner expected of those roles, teaching riddles in that capacity. Hence, lacking a specific class as a school librarian, I had doubts regarding how effectively I could teach riddles through a computer/TV screen since the students would get the riddles and lessons by reading the screen as they passed through the library on their way to classes and whenever they came to the library.

Well... as of today those fears are officially laid to rest as in the space of twenty-four hours 9 people solved the Grandmaster, 3 the Championmaster (two of whom solved it in less than a day), and 1 made history as the first to ever solve the Adeptmaster (and in fifteen minutes no less). I have been teaching riddles for over a decade and today did not just shatter past records, it transcended them enough that I will remember this absolutely crazy day as the Day of Swiftest Solving.

Better yet, a group of students are now determined to become Master Riddle-makers. Truly an excellent day, and the best part was not the solving but the joy – the ecstatic triumph! – on the students faces when they solve these newly dubbed Sovereign-class riddles! 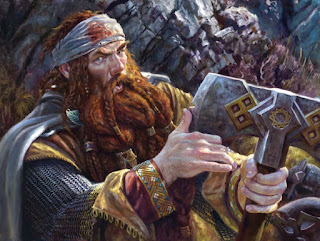 Dwarves. The deep mountain dwellers, bearded, gruff and undeniably proud, yet the dictionary definition of loyal and brave – willing and able to fight to the death in the protection of home, kith and kin. A people who, unlike the nature-loving Elves, pour their skill and devotion into mining and smithing, delving into the deep places of the world to wrest gems and metals free from their dark prisons in order to forge them into works of breathtaking beauty or unyielding armor. Peerless they are in the working of stone, yet share with the Elves a love of song to record the great deeds of their forebears. As in so many things Fantasy, J.R.R. Tolkien's effectively created Dwarves as they are thought of today, most notably in The Hobbit yet also in the wonderful character of Gimli in The Lord of the Rings. Describing the race as a whole (in The Silmarillion): "Since they were to come in the days of the power of Melkor, Aulë made the dwarves strong to endure. Therefore they are stone-hard, stubborn, fast in friendship and in enmity, and they suffer toil and hunger and hurt of body more hardily than all other speaking peoples; and they live long, far beyond the span of Men, yet not forever."

Truly a great race, often employed in classical Fantasy. However, in lyrical music few can invoke them as Tolkien did in The Misty Mountains Cold and The Song of Durin. Yet at least one musical ensemble can, that being Clamavi De Profundis. So enjoy The Song of Hammerdeep!

Today my Grandmaster Riddle was solved for the 24th time, by a fellow teacher no less. (This may not sound impressive, but I have told this riddle to hundreds of people – both children and adult – for over a decade as part of my strictly informal work teaching Riddle Mastery, and this monster is almost never solved even by those who can answer Master-ranked riddles.)

Email ThisBlogThis!Share to TwitterShare to FacebookShare to Pinterest
Older Posts Home
Subscribe to: Posts (Atom)
"The realm of fairy-story is wide and deep and high and filled with many things: all manner of beasts and birds are found there; shoreless seas and stars uncounted; beauty that is an enchantment, and an ever-present peril; both joy and sorrow as sharp as swords."
- J.R.R. Tolkien