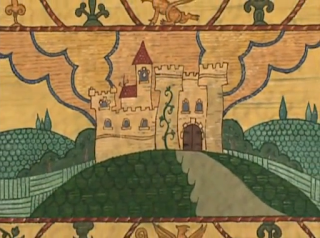 The Redwall series by Brian Jacques: one of the most notable Fantasies in the genre not just for its length of 22 books, but also for its animal cast of characters centered around the peaceful sanctuary that is Redwall Abbey. Well, ideally peaceful were it not for its turbulent history both past and present in an Epic Fantasy world that fills the mundane with wonder.

Redwall has long held a special place it my heart not because I read it but, ironically, because I watched it – the first, third, and sixth books forming the Redwall animated series that, as subsequent research revealed, is a more than worthy adaptation.

So worthy that, having watched it as a small child, what scattered memories I had of it stuck out and year after year returned to me until, finally, I sought out and found it again online. A touching tale, perhaps, but now that personal history it out of the way one can delve into what makes Brian Jacque's work (both in ink and on screen) so evocative. Three elements that build upon and support one another: rhyming riddles, a true warrior code of peace, and limited magic of the subtlest kind.


Beginning with the first – and I am going to try my level best to avoid spoilers here – are the rhyming riddles left by long dead creatures to guide their decedents and/or spiritual heirs. Martin the Warrior for example, Redwall's greatest hero, is only slight less mighty in death as he was in life as his spirit often acts as a guide to creatures of the Abbey, usually its future Warriors, Abbots, and Abbesses. Generally, he appears in dreams and will present the young creature with a riddle or puzzle of some sort that they must solve in order to survive or save a friend. The quote I will note, however, is from Abbess Germaine, one of Redwall's founders and formerly the last Abbess of Loamhedge Abbey. As aforesaid, I am trying to avoid spoilers, so suffice to say that the ancient mouse left this to held future generations find the exact location of Loamhedge Abbey should they need it (which they did):


"Those who wish to challenge fate,
to a jumbled shout walk strait.
Sunset fires in dexteree,
Find where Loamhedge used to be.
At the high place near the skies,
Look for other watchful eyes.
Sleep not ‘neath the darkpine trees,
Be on your guard, take not your ease.
Voyage when the daylight dims,
Danger in the water swims.
Make no sound with spear or sword,
Lest you wake the Longtail Horde
Shades of creatures who have died,
Bones of warriors who have tried.
Shrink not from the barren land,
Look below from where you stand.
This is where a stone may fall and make no sound at all.
Those who cross and live to tell,
See the badger and the bell.
Face the lord who points the way,
After noon on summers day,
Death will open up its grave.

This may sound convoluted but, believe me that it outlines the dangers of a certain rescue mission fairly well. Read (or watch) Mattimeo to learn more.

Moving right along, here one of the best quotes I have heard in a long time. Simple yet deep and wise on multiple levels, epitomizing the morally of the High Fantasy as well as Redwall's true warrior code of peace:
"Always use the sword to stand for good and right, never do a thing you would be ashamed of, but never let your heart rule your mind." - Brian Jacques 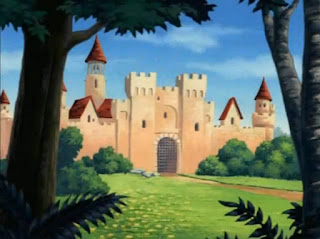 Finally, the use of magic in the series at large is quite limited. Recall how in The Lord of the Rings one does not see Gandalf casting a lot of spells or throwing fireballs; rather, when danger comes Gandalf draws Glamdring (his sword). Yet there is still a steady presence of magic in Middle-earth, subtle yet bright, clear, and elegant. Much the same in true in the Redwall series, mostly in the form of Martin's spirit, though there are other examples such as the crow Mangiz being a successful seer. Granted that this magic is technically even more limited than that which Tolkien employs, yet its presence, elegance, and potent role in the story is no less.
Posted by Ian E.S. Adler at 7:29:00 AM