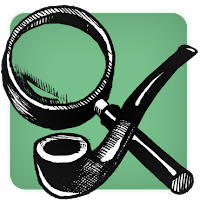 I do not claim to be an avid reader of the Mystery genre – aside from a few kids' books and, more recently, the acclaimed historical murder mystery The Name of the Rose by Umberto Eco – but I have always had the deepest respect for the genre. In fact, it is fair to say, I believe, that Mystery and Fantasy are in fact literary cousins (with Sci-Fi being the Fantastic's only closer relative; a sibling, presumably).


One states this because, while a Fantasy novel may employ little mystery and a Mystery even less magic, both at their best utilize strategy/tactics, good vs. evil with relatively high stakes, and intellectualism. This is not to say that the two genres are not very different in several key ways, but these shared traits prove that they are enough akin to be called cousins. Further evidence of this is provided by the fact that supernatural (i.e. magical/Fantasy) elements are not exactly unheard of within the Mystery genre, and many a Fantasy author – such as J.K. Rowling – took great pains to add elements of mystery.


"When you have eliminated the impossible, whatever remains, however improbable, must be the truth."
- Sir Arthur Conan Doyle[1]

"Caught between the riddle and its answer there is no freedom."
- Patricia A. McKillip[2]

P.S. And if one still remains unconvinced, the two genres share yet another element: Pipes! Seems to me that the Grey Pilgrim and the detective of 221B Baker Street would get along quite famously, what with the former blowing colored smoke rings and the latter creating a (and I quote) "poisonous atmosphere" of tobacco smoke.