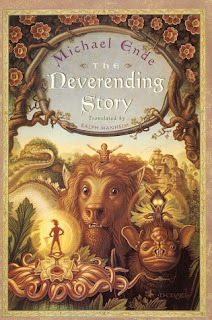 
All I can say is thank you to Bastian Balthazar Bux and Atreyu of the Greenskins , to Falkor the luckdragon, to the The Childlike Empress who accepts all as they are and never uses her power, to Grograman the Many Colored Death, to The Old Man of Wandering Mountain, to Hero Hynreck and Hykrion, Hysbald and Hydorn, and, last but not least, to Carl Conrad Coreander.

I beseech all to read this book, to join Bastion on his first steps. But I warn you that

“If you have never spent whole afternoons with burning ears and rumpled hair, forgetting the world around you over a book, forgetting cold and hunger--
If you have never read secretly under the bedclothes with a flashlight, because your father or mother or some other well-meaning person has switched off the lamp on the plausible ground that it was time to sleep because you had to get up so early--
If you have never wept bitter tears because a wonderful story has come to an end and you must take your leave of the characters with whom you have shared so many adventures, whom you have loved and admired, for whom you have hoped and feared, and without whose company life seems empty and meaningless--
If such things have not been part of your own experience, you probably won't understand what Bastian did next.”
Posted by Ian E.S. Adler at 7:30:00 PM