The Many Worlds of Diana Wynne Jones

Truth is the fire that fetches thunder - Diana Wynne Jones 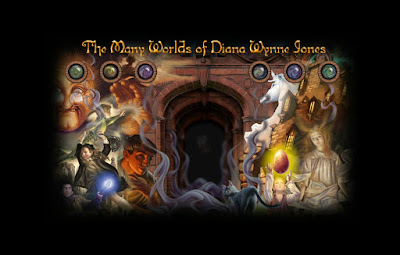 Mistress of the Multiverse and Lady of Endless Surprises – whom I put second only to J.R.R. Tolkien himself. I know this sounds absurd, but the wit, skill, and pure genius of Jones can even go beyond Tolkien and J.K. Rowling at times. She has written countless books, mostly one-volume works which I believes accounts for her lack of fame in this Golden Age of Fantasy Series, and each one is literally and totally different from anything else you will ever read – including other Jones books! The ability to surprise is her signature and she will tear down literary arrogance like hurricane winds will leaves. I once judged myself wise enough in the ways of Fantasy to be able to see through basically any trick. Well, Jones first shredded the banner of my pride, then reduced it to mere threads, then a thread, then just a banner-less pole, and now (after reading her Dalemark Quartet) nothing! The pole is gone, leaving just an empty field where my pride once stood! Believe me, read all her books and by the end you will be able to pick up on other Fantasy author's tricks and subterfuges via instinct alone.

Take Patricia A. McKillip, for instance. She plays many plot-tricks and had my father and I read she before Jones she would have gotten us every time. As it stood though, with our Jones-training we anticipated her several times; her along with Jones' dear friend and quasi-protégé Neil Gaiman. Ever read the Harry Potter series by J.K. Rowling? Well, Diana Wynne Jones came first and much of Rowling's writing style and plot-tricks bears an uncanny similarity to Jones' work. Frankly, I have always deemed it criminal that Rowling not acknowledge Jones' influence on her. Believe me, journey through the Many Worlds of Diana Wynne Jones and you will see and meet things you never even dreamed of. I still cannot fathom how any one mind can not only think outside the box but, by all appearances, exist beyond it as well. Well, this has certainly morphed into a long rant...I guess I had better get back on task. Again, I recommend Jones in general and as a matter of course, but her very best (more or less) are: Hexwood, Deep Secret, the Dalemark Quartet, Archer’s Goon, The Time of the Ghost, Fire and Hemlock, A Tale of Time City, and The Homeward Bounders. (See my Bookshelf for the rest, or check here)
Posted by Ian E.S. Adler at 7:18:00 AM