My father and I just finished Something Rich and Strange by Patricia A. McKillip 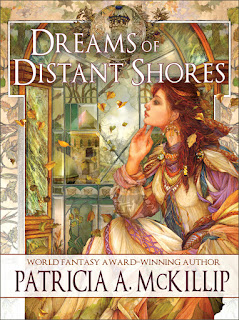 My father and I just finished Something Rich and Strange  by Patricia A. McKillip. (A novella within her Dreams of Distant Shores book)

The book is like a lullaby rocking you as gently with words as the tides do seaweed. I caught myself nearly falling asleep at times not because the story was in any way boring but rather because of the linguistic melody. A true siren's song. One has heard of not being able to see the forest for the trees, but in this book one nearly loses the story for the words. Frankly, I think it is a gross misconception that people even read books; say rather that books read people by projecting themselves onto those willing to open up to them.
That said and while the book did not in the end match The Changeling Sea, calling the story a siren's song is an apt comparison seeing as once again McKillip brought forth the great power of the fathomless depths; only she made it more fathomable as we actually entered the undersea realm this time. Searching for and lured by siren's songs and lost but true mortal love, we saw mer-trees with fishscale-bark and kelp for leaves. (And excellent work on the rescue mission, Megan.)


Ever look towards the sea and each other, Jonah and Megan.

"Full fathom five thy father lies,
Of his bones are coral made:
Those are pearls that were his eyes;
Nothing of him that doth fade,
But doth suffer a sea change
Into something rich and strange."
- Shakespeare's The Tempest
Posted by Ian E.S. Adler at 7:09:00 PM