"A constant image [in myths] is that of the conflict of the eagle and the serpent. The serpent bound to the earth, the eagle in spiritual flight – isn't that conflict something we all experience? And then, when the two amalgamate, we get a wonderful dragon, a serpent with wings." - Joseph Campbell

Joseph Campbell, world-renowned scholar of comparative mythology and comparative religion, author of The Hero with a Thousand Faces, quite eloquently states above part of what Dragons so special in all our hearts, and I say ALL because Dragons belong not to a single literary genre or culture for the simple reason that they are EVERYWHERE. From the West to Far East, these majestic creatures soar over and through myths and legends, and from there glided into Fantasy literature where they are given life anew a thousand times a thousand times over, for if ANY creature personifies not only Fantasy but mythical/legendary creatures it is beyond all doubt the mighty Dragon. This is part one of a series of three posts in which we explore first where and how they appear in real-world mytho-historical accounts and then their role in Fantasy literature coupled with a description of all different types of Dragons. However, do not expect me to cover everything because that is, in a word and as we all know, is quite impossible - for the human who knows all there is to know of Dragons has stuck a knife in the heart of wonder.

"If the sky could dream, it would dream of dragons." - Ilona Andrews

To start, Dragons are no more, and indeed arguably far less, universal in World Mythology than in Fantasy since beliefs regarding them vary greatly depending on the culture. However, since this is not a scholarly dissertation in purpose or length, I can for simplicity's sake safely divide Dragons into two 'species': European/Western and Asian/Eastern. (I apologize to every Asian reading this for lumping your cultures together, as I am well aware that distinct differences exist between, for example, Chinese, Vietnamese, Korean, and Japanese Dragons, but this is a blog page, not a book, and Eastern Dragons share more similarities than differences.) 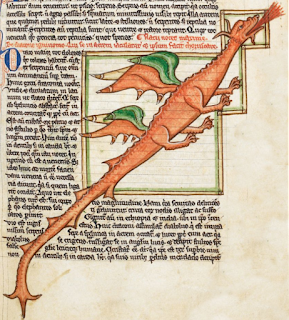 Beginning with the former, since the High Middle Ages European Dragons have generally been depicted as winged, horned, four-legged, and capable of breathing fire. The image to the left is the oldest recognizable image of a Western Dragon as we today would recognize it and comes from medieval bestiary dating from approximately 1260 AD. Recall that tired old trope of Knights in Shining Armor rescuing Damsels-in-Distress from the evil Dragon, and liberating helpless villages paying tribute to the evil Dragon? That is a European Dragon. Indeed, the whole Dragon Slayer concept was born from and evolved around European Dragons, the common theme being that these Dragons were in effect predators who ranked above humans in the local food chain but could be taken out by bold knights. Predator being the key world, because these quaint medieval-style Dragons were not credited with the intelligence Fantasy literature and gaming grants them today. No one would call a tiger stupid, for instance, but neither are they capable of discussing current events with humans. Such were these original European Dragons. In sum, Western Dragons were portrayed as monsters to be tamed or overcome, usually by saints or culture heroes, as in the unaccountably popular legend of Saint George and the Dragon, and typically have ravenous appetites and to live in caves where they hoard treasure. Sound familiar? Aye, we owe the Dragon's Hoard concept to European Dragons, and with it the trope of the great hero slaying the Dragon both for the treasure and to protect their people from further attacks; the Norse epic Beowulf is a perfect example of this, as is the tale of Sigurd from the Nibelungenlied, the Völsunga saga, and the Poetic Edda. 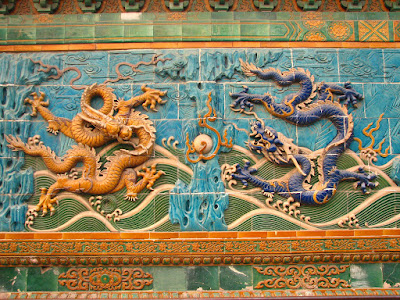 Now for Asian Dragons which, I might add, are far more civilized than their Western counterparts and look quite different as well – typically being depicted as large, wingless, serpentine creatures with clawed feet. The image to the right shows two such imperial Dragons on the Nine-Dragon Wall in Beijing's Beihai Park. Note the word imperial, for in Imperial China, the Emperor near-always used the dragon as a symbol of his imperial strength and power, since in the East Dragons traditionally personified righteous, potent, power and were symbols of strength and good fortune. Meaning that that whole Dragon Slayer trope is generally absent in Asian lore since, to put in succinctly, Eastern Dragons did not look at humans and think of dinner. That said, they were higher on the metaphysical food-chain because, rather than mere creatures, Dragons were gods (or demigods depending). Shenlong, for example, is a spiritual Dragon from Chinese mythology who is the master of storms a bringer of rain, which makes him fairly typical as Asian Dragons were water-deities, rulers of seas and rivers as well as the makers of weather. The Dragon Kings of the Four Seas (the Sihai Longwang) were the masters of key bodies of water in Ancient China and were revered by those living near them. Note how the two imperial Dragons above are flying over a vast sea, while most depictions of European Dragons are of them coiled around towers (or princesses), in caves guarding treasure, or trying to toast a would-be Dragon Slayer with fire-breath. Not so with Asian Dragons who, in addition to not viewing humans as lunch, could not breath fire. Why would a water-deity breath fire, anyway? Furthermore and given their benevolent Divine status, Asian Dragons are far more intelligent and thus, again, infinity more civilized than their Western counterparts. Indeed, in Asian mythology they are often the key protagonists. One of my favorites is The Four Dragons myth, where the Long Dragon, Yellow Dragon, Black Dragon and Pearl Dragon save humanity from a crippling drought, ultimately sacrificing themselves to become the four great rivers of China. Which brings up the final key difference between Asian and European Dragons: Eastern Dragons could shape-shift, taking on various forms both human and animal. Tis no accident that various images of the Dragon Kings depict them as human.

“I do not care what comes after; I have seen the dragons on the wind of morning.” - Ursula Le Guin﻿