I have just finished The Wheel of Time by Robert Jordan

I have just finished A Memory of Light, the 14th and final Volume of The Wheel of Time by Robert Jordan (and completed posthumously by Brandon Sanderson). 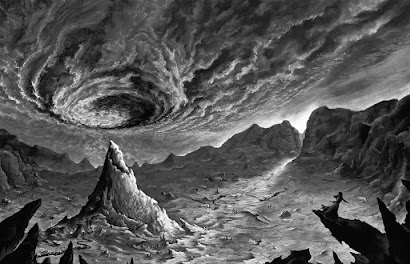 The Wheel of Time turns and Ages come and pass, leaving memories that become legend. Legend fades to myth, and even myth is long forgotten when the Age that gave it birth returns again. In one Age, an Age of Prophecy, called the Third Age by some, an Age yet to come, an Age long past, the World and Time themselves hung in the balance. A balance decided by the Last Battle. Tarmon Gai'don. A battle not at the end of Time but to keep it turning. So it is that the Karaethon Cycle comes to pass, the Dragon Reborn entering Shayol Ghul to wrestle for the fate of the world with the Dark One as, beyond, Tarmon Gai'don rages in the longest battle I have I ever read, detailing true apocalypse where the very laws and fabric of reality rip amid the desperate efforts of humans to live free and with hope. Willing to die so that other may live, and charging death unflinchingly to do so. 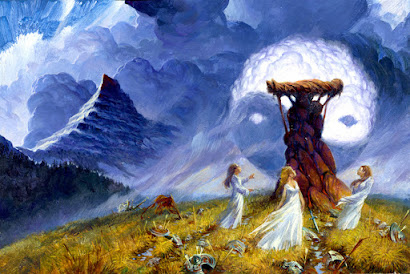 "The Shadow shall rise across the world, and darken every land, even to the smallest corner, and there shall be neither Light nor safety. And he who shall be born of the Dawn, born of the Maiden, according to Prophecy, he shall stretch forth his hand to catch the Shadow, and the world shall scream in pain of salvation. All Glory be to the Creator, and to the Light, and to he who shall be born again. May the Light save us from him."
– Commentaries on the Karaethon Cycle, Sereine dar Shamelle Motara, Counsel-Sister to Comaelle, High Queen of Jaramide, circa 325 AB, the Third Age.

Never in my life have I read a book series such as this. Vast in every sense of the word, spanning the world and all quite distinct cultures within it, populated by the largest cast of characters I have ever seen. Unique in way seldom seen in Fantasy: Tolkienesque in spirit and, in the very beginning, plot, but soon something else entirely. A mythos that is truly Robert Jordan's own, epic by every definition in that it, per its scope, the story is not just about the Dragon Reborn and his friends but, in addition and as is so fitting said by the website Dragonmount, it is the story of an entire world's struggle to deal with war and change, destruction and hope. Yet these are only a bare fraction of the themes, or a gross simplification rather, for each is viewed through the eyes of very different people. 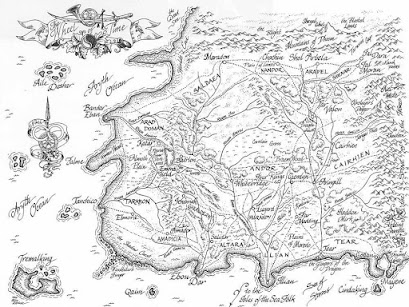 "And his paths shall be many, and who shall know his name, for he shall be born among us many times, in many guises, as he has been and ever will be, time without end. His coming shall be like the sharp edge of the plow, turning our lives in furrows from out of the places where we live in silence. The breaker of bonds; the forger of chains. The maker of futures; the unshaper of destiny."
– Commentaries on the Prophecies of the Dragon, by Jurith Dorine, Right Hand to the Queen of Almoren, 742 AB, the Third Age.
A classic battle between good and evil is at the heart, yet in a world where, unlike in Middle-earth, there are many competing agendas and clashing worldviews, cultural as well as personal, regarding how to meet the threat. A battle between selflessness and rampant self-interest and pride, yet often all three must work together. Cultural hatreds born of blood-feuds overcome, but doing so kicking and screaming. Simple resistance to change coupled with those who feel a great sense of responsibility wanting to avoid it and, indeed, bending over backwards in trying to do so. 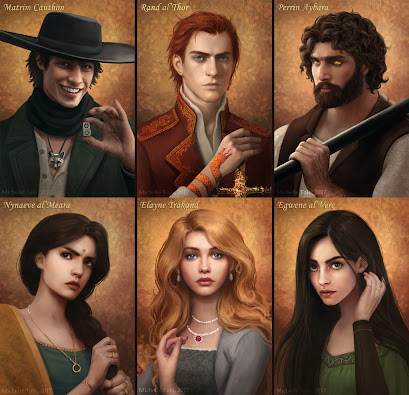 The Borderlanders say "Death is lighter than a feather. Duty, heavier than a mountain" because that duty often involves sending others to their deaths. People you would like to save, people you feel you should be able to save, yet cannot. It is about those burdens and how best the heart can deal with them. About moving forward even when literally countless people and Shadowspawn are actively trying to kill you. As said Birgitte Silverbow, "If you must mount the gallows, give a jest to the crowd, a coin to the hangman, and make the drop with a smile on your lips." It is about caring, about accepting and giving love even in the face of fear that doing so will hurt those people you love. It about doing what needs to be done. It is, in addition and no less than the Dragon Reborn, about:

"A woman, torn and beaten down, cast from her throne and made a puppet. A woman who had crawled when she had to

It was about a man that love repeatedly forsook. A man who found relevance in a world that others would have let pass them by.

A man who remembered stories and who took fool boys under his wing when the smarter move would have been to keep on walking.

It was about a woman with a secret, a hope for the future. A woman who had hunted the truth before others could.

It was about a man whose family was taken from him, but who stood tall in his sorrow and protected those he could.

It was about a woman who refused to believe that she could not help, could not heal those who had been harmed.

It was about a hero who insisted with every breath that he was anything but a hero.

It was about a woman who would not bend her back while she was beaten, and who shown with a light for all who watched."

It is about them all. 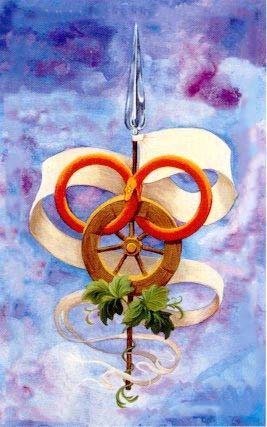 So it is that the Fourth Age dawns, the world in pieces yet protected by the Dragon's Peace and the People of the Dragon. The Towers White and Black whole, Aes Sedai changing and Asha'man loved. Children are about to be born, heroes reborn to protect that peace alongside the children of survivors who will inherent the world so many hundreds of thousands died to protect.
"And it came to pass in those days, as it had come before and would come again, that the Dark lay heavy on the land and weighed down the hearts of men, and the green things failed, and hope died. And men cried out to the Creator, saying, O Light of the Heavens, Light of the World, let the Promised One be born of the mountain, according to the prophecies, as he was in ages past and will be in ages to come. Let the Prince of the Morning sing to the land that green things will grow and the valleys give forth lambs. Let the arm of the Lord of the Dawn shelter us from the Dark, and the great sword of justice defend us. Let the Dragon ride again on the winds of time."
– from Charal Drianaan te Calamon, The Cycle of the Dragon, Author Unknown, the Fourth Age.
Posted by Ian E.S. Adler at 3:54:00 PM