Here Be Dragons - Part 3: Other species of Dragons

Where Dragons came from and their use in Fantasy. Almost finished, for now we at last reach other subspecies of Dragons, species most typically found in gaming. 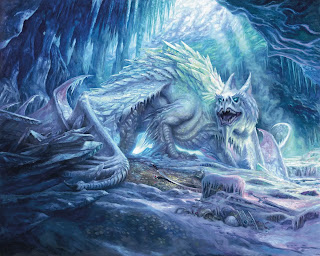 Frost/Ice Dragon: One of my favorites, Frost Dragons are of ice where typical Fantasy and Europeans Dragons are of fire. Wreathed in and white as frost, Ice Dragons live in intensely cold regions and can arguably be called winged blizzards for they breathe ice instead of fire and are thus frigid to the touch. Interesting, I can actually point to works literature that utilizes the Frost Dragon: Harrowing of the Dragon of Hoarsbreath by Patricia A. McKillip, and Tad William's Memory, Sorrow, and Thorn. Why are they my favorite? Purely personal taste, for I find them to be absolutely beautiful and coldly elegant. Fascinating too, since being of ice renders in many ways the opposite of the traditional image of the Dragon. I have loved them ever since I first read Dragonology: The Complete Book of Dragons in elementary school. 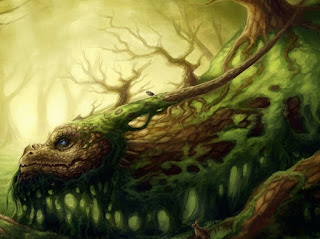 Forest/Swamp Dragon: One generally do not think of Dragons being at home in the wooded or wet areas, but what are human rules to a Dragon's tenacity? These Dragons vary, but are invariably more reptilian, resembling lizards and crocodiles more than aught else. With scales typically green or black, or dark green, for camouflage, or having a bark-like hide instead of scales, Swamp/Forest Dragons breath neither fire nor ice but, rather, poison that comes out as a toxic gas. One could say they are the evolutionary apex of a venomous snake. Some people classify Forest and Swamp Dragons as separate species altogether and, in a way, they are, but not there are not enough differences to warrant dividing them here. 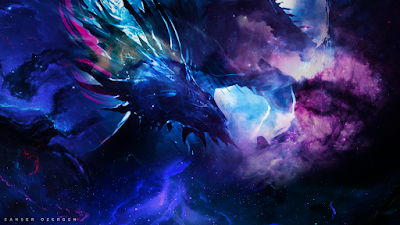 Cosmic/Astral Dragon: These Dragons will really make you see stars, literally. Enigmatic as a rule, Astral Dragons are closely bound to the cosmos and glitter with the light of far off stars, their scales being all the colors of the night sky and the typical nebula - i.e. a ever-shifting shifting mix of blue, black, purple. Invariably highly intelligent to the point where humans rank as near-universal simpletons, they are the stuff of myths, hazy legend, and are chiefly concerned with high matters beyond human knowledge or comprehension. What do they breathe? Usually starry light made corporeal that looks benign yet is no less and often far more deadly that regular dragonfire. 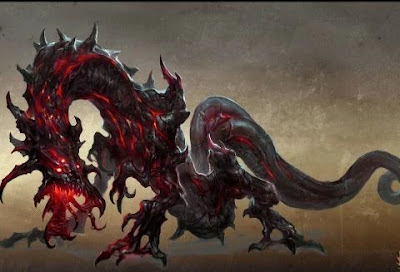 Dark/Chaos Dragon: These are the Dragons who may be summed up by one word: evil. They take many forms and I am sure some question why I chose to merge Dark and Chaos Dragons into one sub-species as, technically speaking, Dark Dragons are merely evil Dragons of any species that deal in dark magic whereas Chaos Dragons are in effect the opposite of Cosmic/Astral Dragons, crazed beings of pure chaotic energy. I blend them because each serve the same function in stories: the evil Dragon whom the heroes need to slay or cripple. Unlike other species of Dragon they view humans with active, typically genocidal, scorn and their power draws foul and power-hungry minds to serve them. What do they breathe? Depends, but a Chaos Dragon generally breathes dark 'fire' that takes more than mere water to quench.

And that is just about it, though naturally there is much more. As I said in the beginning, if any creatures captures the majesty and mystery, glory and wonder, beauty and power of Fantasy literature it is the mighty Dragon. We all know what a Dragon is and instinctively react to the word, but there is so much more. I have seen Dragons that breathe lightening, light, and shadow. I have seen the above species blended, and have not even included Sea Dragons since I classify them as belonging more to the Sea Monster category. Nor have I mentioned wyrms, wyverns, metallic Dragons, Dragonborn, Dragonkin, or any other offshoot Dragon-like races found in Dungeons & Dragons, other games, and the rare book. What do you think I am, a Fantasy encyclopedia writer? If I tried to cover everything I would need a whole new website dedicated exclusively to Dragons. Ever heard of Dragon Ogres? They are from Warhammer and combine ogres with Dragons in the same way centaurs do humans and horses.

However, if you are interested in learning more then I highly recommend reading the aforementioned Dragonology book or, even better, the Fantasy series' I listed, for when one immerses oneself in the Fantastic then, eventually, one will become a master of Dragon-lore. Do I know everything there is to know about Dragons? Hardly, though I admit that it is the rare author (or game) who can come up with new twists that I am unfamiliar with. The point being that do not for a moment believe that reading this page makes one proficient in Dragon-lore for, as said Ursula K. Le Guin "it is one thing to read about dragons and another to meet them," which in this context means that the only way to truly know Dragons is to dive headlong into Fantasy, meeting them as unforgettable characters on the printed page and the gaming screen. For truly there is no sight more wondrous, more awesome in the old sense of the word (i.e. awe-inspiring), than a Dragon in flight. 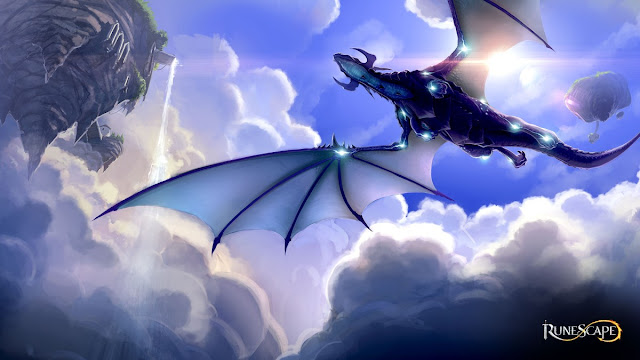 "People who deny the existence of dragons are often eaten by dragons. From within." - Ursula K. Le Guin
Posted by Ian E.S. Adler at 4:30:00 AM

Add comment
Load more...
Newer Post Older Post Home
Subscribe to: Post Comments (Atom)
"The realm of fairy-story is wide and deep and high and filled with many things: all manner of beasts and birds are found there; shoreless seas and stars uncounted; beauty that is an enchantment, and an ever-present peril; both joy and sorrow as sharp as swords."
- J.R.R. Tolkien