A Soviet Union's Lord of the Rings film is found. 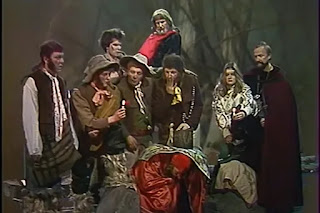 An all-but-forgotten 1991 Soviet-made production of J.R.R. Tolkien's The Lord of the Rings has been found, probably like the Ring itself, at the bottom of a river or in dank lightless cavern given its low quality.

“It’s so bad it’s good,” said Dimitra Fimi, a senior lecturer in fantasy and children’s literature at the University of Glasgow. “It’s a weird concoction of stuff — some of it is really close to the narrative and other bits are curtailed somehow.”So far, Tolkien fans in Russia and the West seem to appreciate the production for what it is and what it is not. Everyone knows it is not the director Peter Jackson’s blockbuster “The Lord of the Rings” trilogy of the 2000s.  “Тhere is no sense in comparing these films,” said Nikolai Matchenya, a 31-year-old fan from Pskov, Russia. “It’s like comparing a new car with new computer systems inside with old, mechanical automobiles.”  The effects? “Too old-fashioned,” he said. The acting? “Poor.” The costumes? Those were “not bad.”  Few would argue about the effects, at least. When the wizard Gandalf sets off magic fireworks, the actor lifts his cape and drawings of fireworks appear. A bug-eyed bird puppet stands in for a giant eagle, and the villainous Sauron appears as an eye superimposed over a cup of pink ooze. Magic is often depicted with a watery effect and some spooky music. 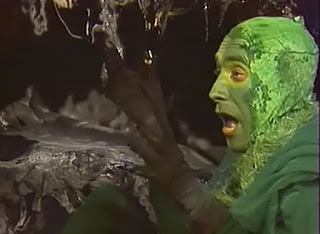 Still, the history behind it is interesting. The Soviet government was less than fond of Tolkien, publishing no official translation of The Hobbit until 1976 and this with ideological alterations, while The Lord of the Rings itself was basically outlawed for decades. Why? Possibly because the Men of the West are the unequivocal good guys fighting and uphill but ultimately victorious war against the Enemy in the East.

For myself, I find this film interesting though hardly impressive. Gollum looks more like a mutant cabbage and Gandalf a cosplay Merlin wannabe who could barely find a decent costume. I look at that image of the above and I even cannot tell who is who. (No, I have not and do not intend to watch it. Time is far to precious, and I am not enough of a movie person to see a stunted version of a masterwork.)