Time-travel in Fantasy (from the White Chronicle to Time Turners)

I recently added an entry to my The Role and Proper Usage of Magic Thingamajigs page, and, since it is rather lengthy and brings up several interesting points regarding the Fantasy genre's use of time-travel, deemed it good enough to make a post out of: 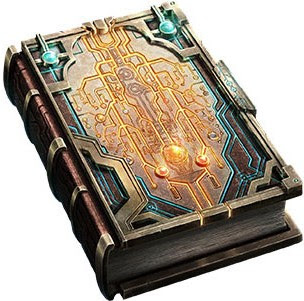 The White Chronicle: As Lippti said, "Countless possibilities fade into the darkness. Yet there exists a razor-thin path of light." From the beyond book-worthy game Radiant Historia: Perfect Chronology, the White Chronicle is/takes a new, simple, and frankly ingenious twist on the classic old time-machine trope. One will notice, after all, that time traveling is seriously seldom used in Fantasy because it can give the protagonists too much power and undermine the seriousness of the story. Recall the Time-Turner from Harry Potter and the Prisoner of Azkaban? If not, stop reading this article for fear of SPOILERS and start the reading J.K. Rowling's Harry Potter series instead. Moving on, Rowling perfectly articulates why time-travel mechanisms (such as her own Time-Turners) are rarely employed in Fantasy literature, so I will give her the floor: "I went far too light-heartedly into the subject of time travel in Harry Potter and the Prisoner of Azkaban. While I do not regret it (Prisoner of Azkaban is one of my favourite books in the series), it opened up a vast number of problems for me, because after all, if wizards could go back and undo problems, where were my future plots?  I solved the problem to my own satisfaction in stages. Firstly, I had Dumbledore and Hermione emphasise how dangerous it would be to be seen in the past, to remind the reader that there might be unforeseen and dangerous consequences as well as solutions in time travel. Secondly, I had Hermione give back the only Time-Turner ever to enter Hogwarts. Thirdly, I smashed all remaining Time-Turners during the battle in the Department of Mysteries, removing the possibility of reliving even short periods in the future. This is just one example of the ways in which, when writing fantasy novels, one must be careful what one invents. For every benefit, there is usually a drawback." Which is exactly why I am writing about the Radiant Historia's White Chronicle instead of the Time-Turner, because the White Chronicle has a key limitation that the basically all time-travel thingamajigs lack. That being that the Chronicle's wielder can only travel back in time to events they themselves participated in, giving them the opportunity to remake important past decisions; to act on 20:20 hindsight, as it were. For example, say you are performing a rescue mission and reach a crossroads one path of which will likely lead to complete disaster. You make the wrong choice, take that wrong path, and you and your friends are toast. However, with the White Chronicle you can cheat death by slipping into Historia and then time travel back to that fate-deciding junction where, armed with foreknowledge, you take the correct path. 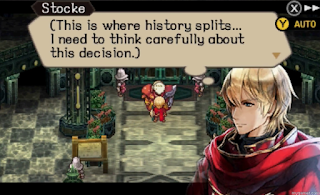 However, if your friends in another part of the world are killed because they made a bad choice (even if it seemed wise at the time of making) then the White Chronicle is powerless to save them. I will not say whether this exact rescue-mission situation appears in Radiant Historia: Perfect Chronology, but the game is built upon this power of the White Chronicle's, the objective being to use it across multiple possible timelines to save the world from desertification. As Lippti said, "Countless possibilities fade into the darkness. Yet there exists a razor-thin path of light." Yet this being the game's objective furthers Rowling and mine's point about why time-travel thingamajigs are scarce in Fantasy literature. She said "if wizards could go back and undo problems, where were my future plots?" Nowhere. Which is why Radiant Historia's plot revolves around being able to do just that in order to move said plot forward. In short, even time-travel thingamajigs like the White Chronicle are dangerous, unwieldy literary tools because instead of being an interesting plot devise their very presence will either undermine or become your plot. Radiant Historia: Perfect Chronology got around this by deliberately making it the plot, while Rowling saw the literary peril of Time-Turners and destroyed them.
Yes, I am well aware that Sci-Fi often employs time travel and is generally unconcerned with temporal paradoxes. In the immortal words of Star Trek: Voyager's Captain Kathryn Janeway, "My advice in making sense of temporal paradoxes is simple: Don't even try." I appreciate this but, interestingly, I have noticed that Fantasy writers tend to avoid temporal paradoxes like the plague. An avoidance I approve of, for temporal paradoxes would only add to the already potent list of problems Time-Turners and the like cause. I fact, I can think of only a single Fantasy which employs a temporal paradox, that being the game Fire Emblem: Awakening; I am not complaining about it, as Awakening ranks among my favorite games of all time, but it does further illustrate my point since the game's plot is literally built around the paradox.