Amazon's The Wheel of Time trailer 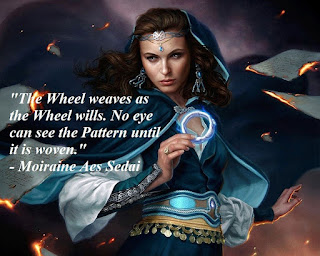 It begins. The great journey on the big screen. Not the beginning because there are neither beginnings nor endings to the turning of the Wheel of Time, but a wind is stirring in the Mountains of Mist and that wind will be a beginning. Looks amazing too, though I saw one scene that would make Rand and Egwene go redder than the former's hair and I hope I did not just see Logain escape his bonds. They certainly seem to have taken some other liberties, but that, I suppose, is unavoidable given the length of the The Wheel of Time. My only question is, where is Elayne? I must assume that our merry band does not reach Caemlyn in the first season, though that would be odd indeed. Unless they choose to introduce her later, when she meets Egwene, Nynaeve, and Min in Tar Valon.
"And the Shadow fell upon the Land, and the World was riven stone from stone. The oceans fled, and the mountains were swallowed up, and the nations were scattered to the eight corners of the World. The moon was as blood, and the sun was as ashes. The seas boiled, and the living envied the dead. All was shattered, and all but memory lost, and one memory above all others, of him who brought the Shadow and the Breaking of the World. And him they named Dragon."
– from Aleth nin Taerin alta Camora, The Breaking of the World, Author unknown, the Fourth Age
"And it came to pass in those days, as it had come before and would come again, that the Dark lay heavy on the land and weighed down the hearts of men, and the green things failed, and hope died. And men cried out to the Creator, saying, O Light of the Heavens, Light of the World, let the Promised One be born of the mountain, according to the prophecies, as he was in ages past and will be in ages to come. Let the Prince of the Morning sing to the land that green things will grow and the valleys give forth lambs. Let the arm of the Lord of the Dawn shelter us from the Dark, and the great sword of justice defend us. Let the Dragon ride again on the winds of time."
– from Charal Drianaan te Calamon, The Cycle of the Dragon, Author Unknown, the Fourth Age.
Posted by Ian E.S. Adler at 8:06:00 PM