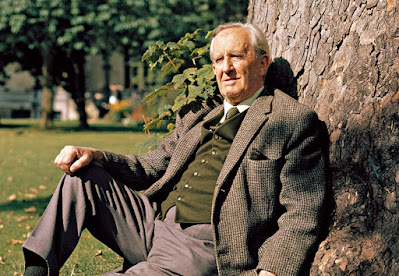 I know that I try to avoid all real-world matters here on Stars Uncounted, but this just too good as, once again, it captures the morality and keen-tongued insight of the Founder and Father of Modern Fantasy. J.R.R. Tolkien often had mixed feelings about his fans and how they regarded him and The Hobbit & The Lord of the Rings because in his mind, and truthfully, he was an acclaimed scholar first and High Fantasy author second while his fans viewed it the reverse. Furthermore, Tolkien himself saw his masterwork through a scholarly lens and thus felt many even of his deepest fan did not truly appreciate or understand his grand epic. Yet there was one particular group of fans he was of one mind about, those being the Nazis who were of course obsessed far and away well beyond the point of absolute madness with ancient Germanic and northern European cultures, meaning that Tolkien's academic writings on Old Norse and Germanic history, language, and culture were unsurprisingly loved by the Nazi elite. A fact Tolkien did not take philosophically, viewing the Nazis in much the same way Gandalf did Saruman, betrayers of the most loathsome order, and made no bones about keeping his utter contempt for them a secret. Tis something of an irony that the fans he most justifiably hated were also the ones most fixated on his scholarship as opposed to Fantasy, and I have already written about how he wrote a letter that is the flawless embodiment of eloquent scorn when his German publisher, in accordance with Nazi law, asked him to certify that he was an "Aryan" so as to publish The Hobbit (and Tolkien, in wrath, nearly forbade a German translation). But I recently came across a passage he wrote in a letter to his son Michael that, in my mind, perfectly captures his feelings towards Hitler and the intellectual treachery of the Nazis against the very thing they claimed to hold most dear. It is as follows:

"I have in this War a burning private grudge—which would probably make me a better soldier at 49 than I was at 22: against that ruddy little ignoramus Adolf Hitler ... Ruining, perverting, misapplying, and making for ever accursed, that noble northern spirit, a supreme contribution to Europe, which I have ever loved, and tried to present in its true light."

Hitler has been called many things by history and I have always employed the phrase "genocidal maniac" to describe him since calling him "the most evil man in history" just does not seem to capture the full scope of his unforgivable crimes and irredeemable madness. Yet, as usual, I have to say that J.R.R. Tolkien hit the nail on the head. My own "genocidal maniac" captures the lunatic's deeds, but "ruddy little ignoramus" captures the soul, or lack thereof in this case, of the man behind the maniac. A small man and failed art student utterly ignorant of history and trying with all his might to be big who had he not risen to power would surely have spent his life as contemptible malcontent spewing conspiracy theories to the dregs of society in which he himself was confined. I also find "ruddy little ignoramus" funny since Hitler is of course typically described in starker, darker, terms, but then my sense of humor has always been rather dry and was itself in many ways shaped by The Hobbit & The Lord of the Rings. Also, please remember that Tolkien wrote this in 1941, during World War II but before the details of the Holocaust, or the fact of it itself, was known. So naturally Tolkien, a scholar to the core, would be furious at Hitler for the misappropriation of Nordic religion and culture. A scholar who knew well the horror of the First World War, recalling that "in those days chaps joined up, or were scorned publicly. It was a nasty cleft to be in for a young man with too much imagination and little physical courage." But he did join, later writing that "Junior officers were being killed off, a dozen a minute. Parting from my wife then ... it was like a death."

"One has indeed personally to come under the shadow of war to feel fully its oppression; but as the years go by it seems now often forgotten that to be caught in youth by 1914 was no less hideous an experience than to be involved in 1939 and the following years. By 1918 all but one of my close friends were dead."  - J.R.R. Tolkien

Add comment
Load more...
Newer Post Older Post Home
Subscribe to: Post Comments (Atom)
"The realm of fairy-story is wide and deep and high and filled with many things: all manner of beasts and birds are found there; shoreless seas and stars uncounted; beauty that is an enchantment, and an ever-present peril; both joy and sorrow as sharp as swords."
- J.R.R. Tolkien