My father and I just finished The Castle Behind Thorns 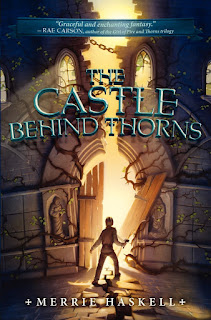 Supposedly it is a kids' book. I reject the term. My father and I just finished The Castle Behind Thorns by Merrie Haskell, an outwardly simple yet unpredictable and enchanting, it is truly unique fantasy so filled with heart and humanness it could resurrect the dead.
And friendship. And forgiveness, for even the most broken of hearts can be mended. Mens videt astra.


"You do not forgive because the person who wronged deserves it.You misunderstand the point of forgiveness entirely. The only cage that a grudge creates is around the holder of that grudge. Forgiveness is not saying that the person who hurt you was right, or has earned it, or is allowed to hurt you again. All forgiveness means is that you will carry on without the burdens of rage and hatred.”
- Merrie Haskell
Posted by Ian E.S. Adler at 7:06:00 PM