Mystery at the Lighthouse

One thing I have noticed is that people seldom think about how literature affects anime and gaming, mostly because such references to them as appear in anime and games are to literary works which are no longer in the popular mainstream. As I have stated, I avoid Science Fiction and Dark Fantasy more or less like the plague; not because I do not respect them so much as that they are simply not taste. However, the two merge with anime and gaming enough to warrant acknowledgement. 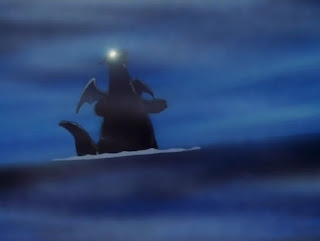 Recently I watched Mystery at the Lighthouse, the 13th episode of the original Pokémon anime (i.e. when Ash first sets out in the Kanto Region), and was again struck by its quiet majesty. In basic plot, omitting the ending so as to avoid spoilers, Ash & co. are lost but soon arrive at a lighthouse on a foggy coast where they meet its keeper, a Pokémon researcher named Bill who spends his time studying rare Pokémon. Namely, he says, one so unique and that no one had ever laid eyes on it; the last of its kind searching down the aeons for a friend. A Pokémon he learned of when he heard a strange noise coming across the ocean one night, a haunting, plaintive call echoing across the mist-shrouded sea, but that was the last time he heard it's cry. Then, in a benevolent attempt to lure the Pokémon, he broadcast a similar answering call across the ocean. Needless to say that before the episode's end the nameless Pokémon makes an appearance, wading through fog and sea to the lighthouse, its calls matching the fog horn. Of course, this was the very early days of Pokémon anime, so the writers made the mysterious Pokémon a super-sized Dragonite (it is not named so, but the outline is clear) instead of a truly unidentifiable legendary Pokémon that would later be revealed and play a role many episodes down the line, but knowing what it is does not take away from the haunting power of Mystery at the Lighthouse. A fact the writers were well aware of as the episode is purely based off acclaimed sci-fi writer Ray Bradbury's The Fog Horn short story. 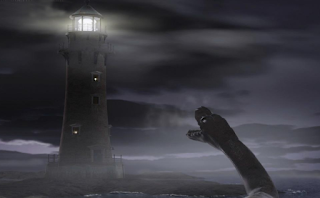 At this point, dear reader, I recommend that you read this short story – here is the link – before continuing, as otherwise you will face serious spoilers (worry not, for it can be read in under ten minutes). Ready or not, here we go. The Fog Horn details a lighthouse keeper who observes the arrival of a gigantic, prehistoric creature emerging from the waves each year, coming in answer to the fog horn which tricks the monster into thinking he has found another of his kind, one who acts as though the monster did not even exist. The lighthouse keeper turns off the fog horn and, in a rage, the monster destroys the lighthouse before retreating to the sea. This may sound rather pedestrian, but Bradbury's reputation is well-earned and the story hooked me by the heartstrings in a heartbeat. Hence I will say no more so as not to rob one of the chance to read it if one has not done so already. Taking 30 minutes on Netflix to watch Mystery at the Lighthouse would be order too as one will note that I did not spoil the ending.

Having read and seen both, one will agree that Pokémon did an excellent job evoking the primal, lonely mood of The Fog Horn, particularly given that it was an anime for young children. Children like me who grew up never knowing the episode's origins because the relevant short story is no longer in the popular mainstream. I only found out by, being curious to learn more about the giant Dragonite if possible, looking up the episode on Bulbapedia and saw this in the Trivia section: "The plot of this episode was likely based on the short story The Fog Horn by Ray Bradbury, which also contributed to the creation of the Godzilla franchise. In the story, a sea monster who is the only one left of its kind, hears a fog horn that sounds similar to its own voice and it is attracted to it." (Yes, sadly I have heard of Godzilla and would like to keep my limited knowledge of it just that, limited, because my opinion monster movies and whatnot is low at best. It is interesting, though, is it not, that a franchise such as Godzilla which we all grow up hearing about whether we want to or not can maintain such mainstream fame while its progenitor, short story, is out of the limelight.)

Seeing as I have asked you, dear reader, to read a short story and watch a 30 minute Pokémon episode, I think it only fair that I stop for now. I will speak of the games tied to literary works in a later post; and no, when I say "tied to" I do not mean in the obvious way that, say, the game Middle-earth: Shadow of Mordor is tied to J.R.R. Tolkien's The Lord of the Rings.

"That is not dead which can eternal lie. And with strange aeons even death may die." - H.P. Lovecraft