I have again finished the Earthsea Cycle by Ursula K. Le Guin 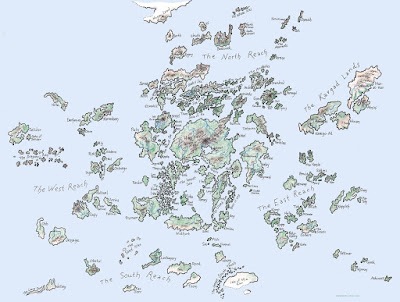 I have again finished The Other Wind by Ursula K. Le Guin, and with it her Earthsea Cycle.

The crown jewel of the already priceless gem that is Earthsea, The Other Wind is so deep that of old it seemed almost esoteric to me – and I loved every syllable of it. Now I understand all those syllables where I did not before, and my appreciation of the book has doubled for it showed beyond anything Le Guin's unrivaled mastery of Dragons and her deep wisdom regarding what separated and separates them from humans.

Earthsea itself is a story like no other. Written without the intention of it becoming a series, Ursula Le Guin followed her pen, letting the winds of the world take Lookfar's sails and Ged where it would. From the School of Roke to the Place of the Tombs at Atuan, to Selidor the Farthest Isle and back to Gont, to Morred's High Seat in Havnor, repeatedly to the dry land and, lastly, to the other wind. I have always said that Fantasy takes care of itself, that the best stories are merely channeled by their writers out of some incomprehensible place, that writers follow their characters as much if not more than the other way around. A belief born out by the words not only of Ursula K. Le Guin but also of J.R.R. Tolkien (because he always enters the conversation one way or another). A belief born out of writing my own Fantasy series in my own Archipelago that was directly inspired by Earthsea. But all tales have their endings, for Le Guin herself has passed and with her the knowledge of what came after, and thus do I depart the wondrous Archipelago and the other lands (and winds) of Earthsea.

Farewell for now Ged and Tenar, Ogion the Silent, Tehanu, Master Doorkeeper, Lebannen and Seserakh, Orm Irian, Azver the Master Patterner, Alder, and Kalessin the Eldest. Until next time.

"Farther west than west
beyond the land
my people are dancing
on the other wind." - The Song of the Woman of Kemay
Posted by Ian E.S. Adler at 10:50:00 AM