It occurred to me recently that I forgot a Fantasy sub-genre in my Types of Fantasy page. So without further ado: 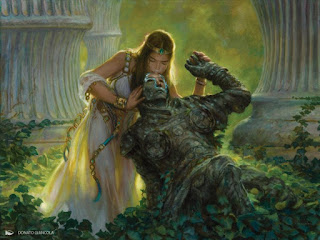 Romantic Fantasy: As the name implies, Romantic Fantasy is basically a Fantasy that focuses as much if not more on a budding romance between characters as it does the rest of the story, and, per the "official definition", one of its key features it that it involves the focus on social and political relationships, in addition to the romantic. Always married to another sub-genre, Romantic Fantasy combines itself with any of the above listed types of Fantasy to provide a setting. The Twilight Saga by Stephenie Meyer, for example, is Dark Romantic Fantasy, while Kristin Cashore's Graceling Realms is Medieval Romantic Fantasy. I generally avoid this sub-genre since, while I have nothing against and in fact very much enjoy romances in Fantasy, I prefer it when they supplement the overall plot instead of dominate it to the point where it feels like the rest of the story is simply to drive and add tension to the romance. That said, I adore the Graceling Realms and very much enjoyed The Twelve Houses series by Sharon Shinn. Of these two, however, I prefer Graceling Realms because, while Shinn created a worthy world and a rich cast of funny and varied characters (such as Senneth and Kirra Danalustrous), the I felt romance element dragged the story to a notably slower pace than it could have been. An issue Graceling Realms does not have for the simple reason that the rest of the plotline is no less important or gripping than the romance. (Some publishers distinguish between Romantic Fantasy where the fantasy elements is most important and Fantasy Romance where the romance are most important, while others say that the line between the two has essentially ceased to exist or, if it remains, is in constant flux. For myself, I agree with these others.)