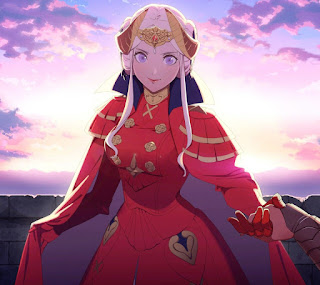 I just finished playing Fire Emblem: Three Houses (Edelgard's route, Crimson Flower).
As with any Fire Emblem game, it was an utter joy to play: a bookworthy storyline with a vast cast of real, fleshed out, unique and compelling characters in a deeply sophisticated world which makes the dialogue no less compelling than the tactical battles that makes Fire Emblem a standout. Indeed, I have read books with less world and character building than Three Houses, and watched anime movies with poorer voice acting and subtle body language.
As to the plotline itself, leave it to Fire Emblem to create a game with three obvious story routes that all share an enemy...and a partially hidden fourth route where that enemy is in fact a dear friend and fighting against the revealed true oppressor of humanity. This Crimson Flower route is the path I tread alongside Edelgard von Hresvelg, heiress apparent to and then Emperor of the Adrestian Empire. Even in the darkest moment in the Holy Tomb of Garreg Mach Monastery I chose to trust her, knowing her heart and ideals, and never once did I regret that decision as layers upon layers of centuries old deceptions that true enemy had propagated were gradually pulled aside.
"Still, we have no choice but to eliminate those who cling to unreasonable ideas of justice. Even if our enemies are the gods themselves...we must never lose sight of our goal. It's not possible to change the world without sacrifice. Dying for the greater good is not a death in vain." - Edelgard von Hresvelg
It is for this reason that I view Crimson Flower as the canon Three Houses ending. Strange logic? No stranger than viewing Fates' third Revelation route as the true canon ending because it is the only one where we rid the world of Anankos. Even the FE Wiki states that "Anankos is the true main antagonist and the true final boss of Fire Emblem Fates." Furthermore, the game's theme song (provided at the post's end) is a fairly clear reference to Edelgard. I cannot list all the reasons why without giving key spoilers but, last time I checked, a red rose can be adequately described as a crimson flower. 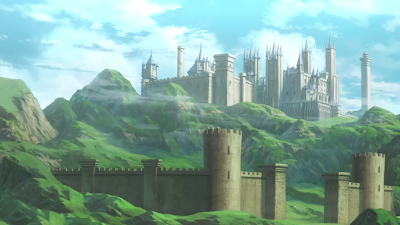 That said, while the game was again exemplary, it was not my favorite of the Fire Emblem games for the simple reason that, like with FE: Fates, the complexity of the world – while obviously deep – is equally obviously spread thin between the four routes; meaning one has to play all four to get the full picture of the situation in Fódlan. For example, while clearly shown and implied, in Crimson Flower we get little to no details regarding Edelgard's history with Dimitri, nor the full story of those who slither in the dark. Call me a purest if you will, but I believe that each route should individually be comparable to past single-route FE games such as FE: Shadow Dragon. 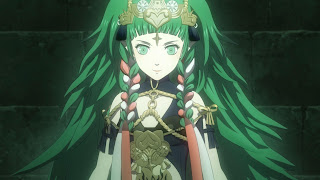 Furthermore and as to the actual battles themselves in addition to the teaching element at Garreg Mach, Three Houses was a tad lacking in the former (unless I am a true master tactician without knowing it) due to the ability to turn back the hands of time and seeing where each individual foe will strike next; meaning it was less challenging, despite the fact that it was the first FE game I played on Hard Mode. As to the latter, it was unprecedented yet quite enjoyable. Overall opinion? The game was amazing because Fire Emblem is incapable of being otherwise and boasts many elements entirely new to the franchise, yet it contains much untapped potential as the overall story-arc was lacking compared to, say, FE: Awakening (which remains my unquestioned favorite.)
Peace and prosperity to you, Edelgard & Byleth, Hubert & Bernadetta, Ingrid & Felix, Petra & Linhardt, Ferdinand & Dorothea, Caspar, Leonie, Jeralt, Ashe, Hanneman, Alois, Manuela, Ignatz, Lysithea, Shamir, and Claude. To those who died, good people and former students blinded by the enemy's deception, may Sothis guide your souls.
"Reach for my hand, I’ll soar away
Into the dawn, oh I wish I could stay
Here in cherished halls, in peaceful days
I fear the edge of dawn, knowing time betrays
Faint lights pass through colored glass, in this beloved place
Silver shines, the world dines, a smile on each face
As joy surrounds, comfort abounds, and I can feel I’m breaking free
For just this moment lost in time, I am finally me
Yet still I hide, behind this mask that I have become
My blackened heart, scorched by flames of force I can’t run from
I look to you like a red rose seeking the sun no matter where it goes
I long to stay where the light dwells, to guard against the cold that I know so well."
Posted by Ian E.S. Adler at 8:35:00 AM