The Nature of Middle-earth, coming June 2021 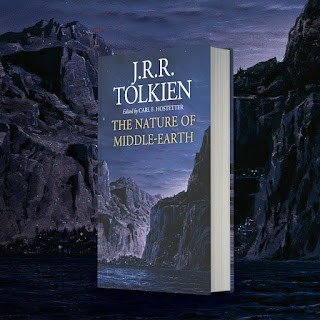 Tis common knowledge that in 1937 J.R.R. Tolkien published The Hobbit, followed a little less than twenty years later by The Lord of the Rings. What may be less known is that the Father and Founder of Modern Fantasy was a perfectionist of the both the best and worst kind, the former because that is why his legendarium is the highest of the best, and the latter because it kept him from publishing so much of his work during his lifetime – which is why The Silmarillion, The Book of Unfinished Tales, and much else was later published by his son, the late lamented Christopher Tolkien.


Yet now, still and even from beyond the circles of the world and the Halls of Mandos does the great J.R.R. Tolkien keep giving! For in June next year comes hitherto unseen essays written by him, fitting called The Nature of Middle-earth. What are they about? Elvish immortality and reincarnation (yes, Gandalf is not the only one to return from death), the nature of the Valar, the lands and beasts of Númenor, the geography of the Gondor, and even who had beards. This last may seem odd, but the only Elf known to have a beard is Círdan the Shipwright, and no Hobbits no matter how old have been seen with one, and it is widely believed that Dwarven women have facial hair as well. For myself, I am particularly looking forward to learning more about Númenor and the Valar; the beard question has never interested me much. Regardless, it is clearer than ever that Arda truly is vast beyond the thoughts of Elves and Men.

"The realm of fairy-story is wide and deep and high and filled with many things: all manner of beasts and birds are found there; shoreless seas and stars uncounted; beauty that is an enchantment, and an ever-present peril; both joy and sorrow as sharp as swords." - J.R.R. Tolkien