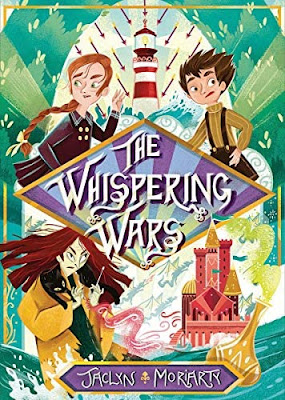 My father and I just finished The Whispering Wars by Jaclyn Moriarty, book two of her Kingdoms and Empires Series.

Well, this was certainly a book. A sequel and prequel to book one, and yes I am quite aware that is SUPPOSED to be an oxymoron but, as with so many things, Jaclyn Moriarty bends the lines - and very nearly literally the Kingdoms and Empires themselves - in absolutely fascinating ways. Do not let the whimsical, sometimes downright childish tone of this book fool you, for not only it is complex in matters both magical and mundane, it also portrays quite compellingly the horrors of war from a point of view other than that of soldiers. That plus the class differences between the entitled wealthy and the orphaned poor, and how these barriers were overcome by a group highly...eh... eclectic children. A goodhearted idiot, twins always readings newspapers, an mean-spirited prig, a girl who wants to fly, a boy who rides laundry shoots on his birthday, and a girl who cannot abide violins. Oh, and a pair of future children who have hopefully learned to respect linear causality.

I would say goodbye save for the fact that I am quite certain I will see ye Children of Spindrift in the next books.

(By the way, Jaclyn Moriarty obviously had WAY TO MUCH FUN writing this book. A book and series that continues to channel the spirit of the great Diana Wynne Jones.)