As before, I played Edelgard's Crimson Flower route, for, as I explained upon first finishing the game (see the above link), I deem Crimson Flower as the canon Three Houses ending. Making it an honor to once again fight for and attain the world envision by Edelgard von Hresvelg alongside the rest of the Black Eagle Strike Force. Indeed, I know all players of Three Houses will agree that the game is special because of its amazing cast of characters, our students at the Officers Academy, who become cherished friends. This could be said of most any Fire Emblem game of course, but replaying Three Houses made me realize that Garreg Mach Monastery almost feels like a second home. Its grand vistas, the library, the side-by-side lake and greenhouse where one can garden and fish, the student dormitories where social classes mean less, the Training Grounds where knights and students alike come to hone their combat skills and hold a monthly tournament. The marketplace by the front gates where merchants (like Anna) gather which leads to the Entrance Hall, the Reception Hall on the first floor of the main building where social events such as the Ball during the Ethereal Moon are held, and of course the Dining Hall where I enjoyed many a meal with my students.

Like I said, one comes to know and care for Garreg Mach and all who dwell therein; a gaming Hogwarts, as it were. Yet, like Hogwarts, Garreg Mach has many deep places, secret passages, and hidden lore. Which brings me to the question of why I chose to replay Three Houses, the first video game I have ever done so. The answer? To discover one of its deepest secrets. Abyss.

“We're the secret fourth house in Abyss. The surface world turned its back on us, and we did the same in return.” – Balthus

Yes, I replayed Three Houses in order to play its Cindered Shadows route for the first time and see how the incorporation of the Ashen Wolves House into the Black Eagles would change the story and battles. That, and makes new friends in Yuri, Constance, Hapi, and Balthus of the Ashen Wolves along with the rest of the Abyssians who dwell beneath Garreg Mach. And in meeting them, in exploring this safe haven for those who have been shunned by the people on the surface of Fódlan, I saw further evidence of the crimes of the Church of Seiros. 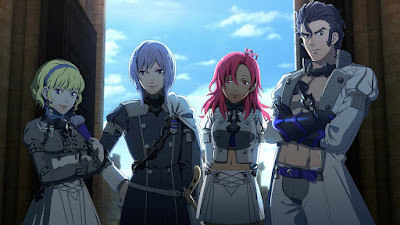 Hence it was a joy not only to get to know the Ashen Wolves, but also felt right to have them join Edelgard in her quest to destroy that which which had confined them. The Black Eagles and Ashen Wolves together building a world where none need ever again hide from the sun because they know too much, were a failed pawn, or have abilities that "threaten stability". A place where a Shadow Library of banned books need not exist underground.
In short, I loved the Cindered Shadows route... yet not only for the aforesaid reasons. I said on first finishing Three Houses that battles themselves were "a tad lacking due to the ability to turn back the hands of time and seeing where each individual foe will strike next; meaning it was less challenging, despite the fact that it was the first FE game I played on Hard Mode." This still holds true for game as a whole since, on replaying it, I found even the few battles I judged truly hard the first time to be far easier – though this might, I admit, be more than partly owed to having the Ashen Wolves in the army. Constance and Hapi are mages of devastating power and mobility, while Yuri is a sword artist equal to Felix and a healer (and thief) besides. However, Cindered Shadows was a true tactical challenge on the level I expect of and love about Fire Emblem, with a storyline that kept me on the edge of the couch. But all things come to and end, even replayed games with a new side-story added. Fódlan is united and free from an antiquated class system under Edelgard's meritocracy, those who slither in the dark are dead, and I am feeling both happy and wistful as I shall miss my friends both old and new, Garreg Mach and Abyss. (I also think Abyss and the Ashen Wolves had greater story potential than they were used for, but I can say nothing on that without revealing spoilers.)

Peace and prosperity to you, Edelgard & Byleth, Hubert & Bernadetta, Ingrid & Felix, Petra & Linhardt, Ferdinand & Dorothea, Yuri & Constance, Caspar, Hapi, Leonie, Jeralt, Ashe, Hanneman, Alois, Manuela, Ignatz, Lysithea, Shamir, Gilbert, Annette, and Claude. To those who died, good people and former students blinded by the enemy's deception, may Sothis guide your souls. (I regret to say that I did not save as many lives this round as I had hoped, but I did save a couple who perished before.)