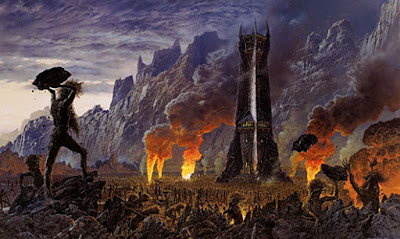 All who have read or even just watched The Lord of the Rings knows that the March of the Ents in their successful assault on Isengard is beyond question both one of the most memorable and epic events in the War of the Ring. Yet, interesting, what is less commonly known is how that scene took shape in the mind of J.R.R. Tolkien, what planted the inspirational seeds, as it were. Perhaps unsurprisingly, the answer is the name of another giant in English and indeed world literature, one whose works are admired by and an inspiration to countless people. That name being William Shakespeare. What will come as a surprise, however, is that those seeds of inspiration planted in Tolkien were not born of admiration but, rather and in Tolkien's own words, "bitter disappointment and disgust".

"What?" I can hear you asking in confusion. Well, I will answer but, before I do, I must offer a SPOILER warning as what I am about to say will spoil part of the ending of Shakespeare's justly famous play Macbeth. Moving right along now and short play shorter (Macbeth is the Bard's shortest play), the three witches give Macbeth a prophesy part of which states that he and his ill-gotten crown will be safe until Great Birnam Wood comes to Dunsinane Hill. A foretelling which relieves Macbeth, making him feel secure, because he knows that forests cannot possibly move. Interesting, is it not, that Macbeth has seen the witches' magic and yet instantly dismisses the notion of an army of trees coming to besiege a castle? Of course, Saruman had even less of an excuse since he had met Treebeard, knew the Ents to be his neighbors, and yet neither expected nor made a plan accounting for the possibility that they might take serious offense at his Uruk-hai going into the their forests with large axes. 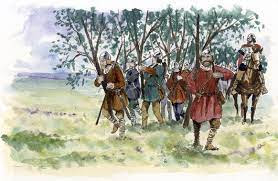 Anyway, Macbeth gets a rather nasty shock when his scouts report that the Great Birnam Wood is coming. Except that, while it was the fulfillment of the witches' prophecy, it was not the actual Wood. Rather it was a trick. His enemy, Macduff, is leading an army against Dunsinane Castle, and while encamped in Birnam Wood orders his troops to cut down and carry tree branches to camouflage their numbers. Hence, to Macbeth from atop his walls, it merely seems that the Great Birnam Wood comes to Dunsinane Hill.

Thus were planted the seeds of the March of the Ents, for in a letter to the poet (and his longtime friend) W.H. Auden, Tolkien notes that the Ents were possibly spawned from his own frustration with Shakespeare's Macbeth. In his own words: "Their part in the story is due, I think, to my bitter disappointment and disgust from schooldays with the shabby use made in Shakespeare of the coming of 'Great Birnam wood to high Dunsinane hill'." It is also interesting to note that both Saruman and Macbeth were traitors.

Speaking purely for myself and, I believe, many others, I think the March of the Ents is far more epic – both as a piece of literature and on general principle – than the Great Birnam Wood coming to Dunsinane Hill in Macbeth. J.R.R. Tolkien's The Lord of the Rings and the plays of William Shakespeare are so different that is impossible to compare the two authors; the works of both were and are literary masterpieces and cultural icons of the absolute highest order. Yet, in this matter of besieging forests, I think it is pretty clear that the Founder of Modern Fantasy did a better job than the Bard.