I have once again finished A Wizard of Earthsea by Ursula K. Le Guin 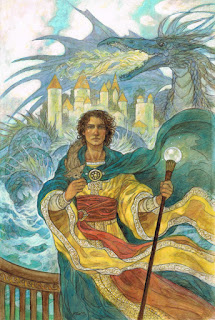 I have once again finished A Wizard of Earthsea by Ursula K. Le Guin, the first book of her Earthsea Cycle.

While the rest of my generation went by train to Hogwarts with Harry, I (after falling in love with and leaving Tolkien's Middle-earth) traveled by ship to the School of Roke on the Isle of the Wise with Ged. So reading this again was, for me, probably not unlike when others reread Harry Potter and the Sorcerer's Stone – experiencing anew the magic of the first School of Magic one ever attended. While others dream of sitting under the Sorting Hat in the Great Hall, I desire to give my name to the Master Doorkeeper and be greeted by the Archmage in the Court of the Fountain. Yet Ged faced not an evil wizard but, rather, his own shadow, for spells cast in pride and hate will lead to ruin and a nameless terror that, in the end, can only be healed by naming it. As Ged did on the open sea.

“To hear, one must be silent.” - Ogion the Silent, Wizard of Re Albi