A while back I wrote three posts on Dragons and then a page combining them. However, for some reason it only just occurred to me that I left out a not uncommon sub-species of Dragon. 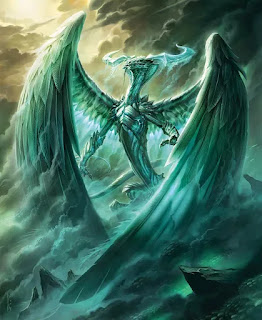 Ghost/Spirit Dragon: As their name implies, these are Dragons who died and came back after a fashion for much the sames reasons human shades return; unable to accept death, unfinished business in the material world, or an emotion so powerful it cheats death. Generally rare as few Dragons have such issues and fewer necromancers are mad enough to try and raise one, Spirit/Ghost Dragons are either beyond reason and, much like a human ghost, more interested in haunting and punishing intruders than talking, or highly intelligent and thoughtful – having learned something from death itself and/or whatever mistake or mishap killed them (okay, maybe mishap is too light a word seeing as Dragons very rarely die accidentally, but I am sure you get the point). I guess one could also technically include Bone/Zombie Dragons in this category, but I do not since they are no different from regular mindless undead things and last only as long as their rotting flesh and bones do. What do Ghost/Spirit Dragons breathe? Typically pale, ghostly fire of course. What did you expect, ectoplasm?